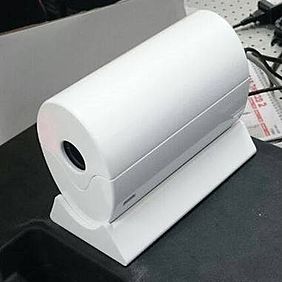 A first-generation demonstration system of the camera. Credit: Unispectral

An Israeli company has announced the availability of a new optical filter to replace the standard Bayer filter (green red and blue) on a digital camera sensor.

The Bayer filter is used to pick up the three fundamental wavelengths that are captured by our eyes to create a color image in our brain. Similarly, in a digital camera (or in Photoshop...) this information is translated into a color that will then be displayed on a screen or printed. There are many possibile "ways" to interpret the data produced by a sensor and indeed this is what makes a difference in post production programs.

The Bayer filter is an essential component of the sensing. At the same time the splitting of data into green, red and blue provides a subset of the information that is actually carried in the beam of light hitting the sensor. Each beam of light is an amazing carrier of information, since it contains photons at many different wavelengths coming from different directions. The lens in a camera is tasked to find out the direction of each photon (and this is conveyed to the sensor by sending the photon to a very specific pixel) but it is the filter that selects the wavelengths and the Bayer filter mimics what happens in our eye. This makes sense since the point is to create an image that our eye will recognise.

A new company, Unispectral, in Tel Aviv has decided to find a way to capture more of the information carried by a bean of light and has created a unable filter that can selectively capture wavelengths. In association to a software that analyses the data captured by the sensor it can provide a new set of information with unexpected results.

The photons reaching the sensors are the ones that bounced off from objects. This bouncing depends on the atoms on the surface of the object: different atoms bounce off photons and different wavelengths. Hence, by detecting these wavelengths we can detect the type of atoms. In other words by taking a picture of an object we can know the material that object is made of.  And this is exactly what Unispectral has demonstrated.

So far the prototype is bulky but they promise to shrink it to fit a normal digital camera, including the ones we have in our cell phone.

Hence, this is their promise, in a few years you will use your phone as a magic wand to tell you the substance of an object. You can point it at a necklace and it will tell you: "watch out, it is not gold, even if it looks like it...", you'll point it at a meal being served and it will warn you of the presence of gluten...

Amazing what a cell phone can do. Who could have ever imagined?