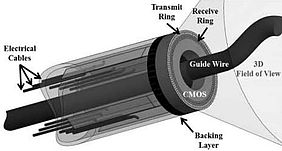 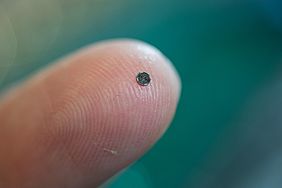 A single-chip catheter-based device that would provide forward-looking, real-time, three-dimensional imaging from inside the heart, coronary arteries and peripheral blood vessels is shown on the tip of a finger. Credit: Georgia Tech Photo, Rob Felt

Endoscopy has transformed medicine in the last fifty years and has progressed in getting smaller and in being able to act. Many surgeries that used to be "heavy" on the patient with lengthy hospitalisation have now become "light" on the patient and are performed as day hospital.

It looks like there is still space for improvement.

Researchers at Georgia Tech have developed a microscopic probe  that can be placed on top of an optical fibre (1.4 mm) and inserted inside arteries and veins detecting the volumetric space around it. These data are transmitted to a computer that will create a rendering of the space that can be viewed by the doctor to detect anomalies and to take action.

It is the first time that we have the possibility to look inside out our body cavities in real time in 3D. So far only 2D images were possible.

To capture data the probe contains hundreds of ultrasonic generators and receptors. The data are processed locally to be compressed and transmitted over 13 tiny wires that are also the support used to move the probe inside the blood vessels.

Further processing, to render the data into volumetric images, is performed in a computer on the doctor desk. Clearly, it wouldn't be a problem to carry this image to augmented reality glasses so that the doctor can see the image as he is manipulating the probe to move it around.

Volumetric views of the beating heart are now possible, from the inside of the heart, letting the doctor to observe the flow of blood through the valves.

It is the magic of miniaturisation, but it is also the magic of software, both in compressing the signal and in rendering complex data into images that are easy to interpret.