Looking at single molecules inside your brain 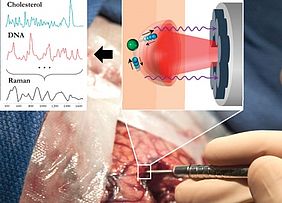 Joint teams of researchers at the Mc Gill University in Montreal, the Montreal Neurological Institute and Hospital and Polytechnique Montreal have developed a hand held probe, looking like a pen - see the image -, based on Raman spectroscopy that can detect specific molecules present in cancerous cells. This allows the surgeon to attack, and remove, with a much better accuracy a tumour.

Cleary, in this kind of operation you can't, so to say, play on the safe side and remove much more tissue to be sure of the eradication of the tumour. The more "good" cells you remove, the more damages you do at the brain with potential heavy impact on functionality. This is why surgeons try a fine balance between removing all cancerous cells and minimising functional deficit. The problem is that it is impossibile, in general, to distinguish at very fine grain cancerous brain tissue from normal one

The "pen" is basically a laser that is used to illuminate very tiny part of the brain surface. The laser light is scattered in very specific ways depending on the type of molecules hit. This scattering (Raman scattering) is picked up by a detector in the pen tip and analysed by a computer that will be able to tell the surgeon if that part is cancerous or not. Clearly, the surgeon knows from pre-operative exams where the tumour is hiding and will access to it through surgery. Once most of it has been removed he will use the "pen" to see where cancerous cells are still remaining and can explore nearby areas where sometimes cancerous cells might have migrated. These would not have been visible by the standard pre-operative exams and can be detected with the "pen".  Trials on 40 patients have shown an accuracy of over 90%, which in biological fields is amazing.