Looking ahead to 2050 - Symbiotic Autonomous Systems I 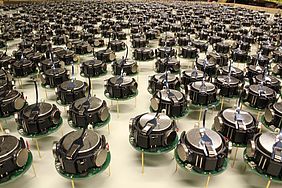 Swarm robotics is a relatively new area that is studying biological behaviour to create a super-organism, a swarm intelligence, out of many simple robots. Thomas Smitckl and his colleagues are studying adaptation and evolution for symbiotic multi-robot organisms. Credit: University of Gratz

The Future Direction Committee FDC of the IEEE in consultation with IEEE Societies, is kicking off a new Initiative on Symbiotic Autonomous Systems.

What are these “Symbiotic Autonomous Systems”?

It is nothing really new, in the sense that the history of human civilization has been characterized by the continuous interplay of people and their artifacts.

This Interplay is so important that historians are used to characterize a civilization age with an emerging and then widespread use of an artifact, or technology to create it (the age of "stone", bronze"," iron").

Today we are in the "computer" age, transitioning to the "digital' age.

Symbiotic Autonomous Systems may be seen as a next step in the digital age. The age of computers has fostered automation of many activities and its performances have enabled the creation of new ones. The age of “digital” is harvesting the computer productions, the 0 and I, the bits, giving rise to a parallel World, the cyberspace.

In the coming decades we are bound to see progress in both the "computerization" of the World and in its digitalization. These two trends will strengthen one another and will overlap creating the age of Symbiotic Autonomous Systems, SAS.

The progress in computerization (l include into this word both the "chip" and the 'software" part) is leading to increasing "robotization" of objects and to a seamless presence in our everyday life. We are already commuting using robots (the metro system in Turin, where one line is fully robotized) and in a few more decades our cars will be robots. Vacuum cleaners robots no longer make headlines and my grandchildren are growing with a playground populated by robots.

The Internet of thing is on us and it is growing in our homes, in our cities, at the office...

The sheer number and variety of computerized/robotized objects will seamlessly morph into a fabric of connected objects out of which an overall "behavior" will arise.

On the other side, digitalization creates an expanding cyberspace formed by islands that will progressively be connected with one another.

These two worlds will get more and more intertwined.

Think about TESLA cars becoming more and more autonomous each one connected to the TESLA cyberspace to form a virtual fleet that is learning and distributing knowledge back to each TESLA car.

We are part of this evolving ambient and we are interacting with both computerized / robotized objects and with the cyberspace.

It will go a step further: loT will become part of our body and artificial organs will become normal in the third decade of this century.

These embedded devices will become symbiotic with us (nothing new here, we are living in symbioses with billions of bacteria, they actually outnumber our cells!) and will improve our body Communications capabilities with our ambient extending our symbiotic life.

Symbioses, strictly speaking, is about two living beings that are joining forces to achieve something that would not be achievable by just one of them. In more general speaking we can speak of a symbiotic relation when two entities are piggy-back one-another (my wife insists that I am in a symbiotic relation with my computer, since I am always with it…). The broader meaning of symbioses is also the one used by the University of Glasgow in the Symbiotic Autonomous Systems and Robots one of their postgraduate research programs.

Hence, what I represented before, strictly speaking, is not about symbioses, since I have been talking about artifacts interacting with artifacts and artifacts interacting with humans.
Well, in the coming decades, and for sure by 2050, it will get more and more difficult to put a dividing line between life and non-life. Artifacts will be able to become aware, to self repair, to look for “food” an to multiply. May be they will not be “sentient” but this applies to bacteria as well, yet they are typical examples of symbioses.

Symbioses in nature seems just to happen, it is not planned nor it is the result of an agreement between the symbiotic partners. That will be similar, in many cases, in the symbioses among artifacts (and artifacts and humans) once the artifacts will grow to become self adapting (and we already have examples of this, with deep learning technologies, including my GoodNote application that is learning to recognise my handwriting and it is actually getting better than myself in reading my chicken scratches).

The “autonomous” qualification is important. It does not necessarily mean that each partner can live independently of the other (we cannot live without our symbiotic bacteria), it means that each partner is behaving according to its own “rules”, and the symbiotic relation binds the two autonomies, as it would happen in self driving vehicles in a smart city.

The “system” qualification is also important. The future will see behavior and “meaning” stemming from complexity and this, in turns, is a side effect of systems. A single IoT will not qualify to become a partner in a symbiotic relation, but a system comprising several IoTs, interconnections, data, and intelligence will.

Hence this initiative stemming from a vision of future built by independent players that will work independently but will leverage on one another giving rise to new life forms.