Looking ahead to 2050 - Renewable Energy I 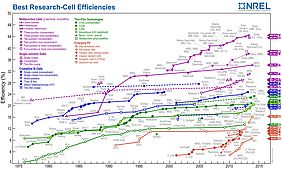 Photovoltaic (PV) technology evolution has led to an enormous increase in efficiency. In the graph the evolution for different technologies. Notice that the crystalline silicon technology is the one that has the best cost to efficiency ratio. Credit: NREL

By 2050 PV should serve 11% of the energy requirements worldwide. Credit: PVBuzz

The advance of technology is making renewable energy economically competitive to fossil fuels. Standard photovoltaic has now an efficiency exceeding 15%, crystalline silicon panels have reached 20% efficiency and in the labs the most advanced solutions have reached 25% (the record has reached in 2016 34.5% efficiency, close to the theoretical limit, for unfocussed light, and 41.1% for focussed light, see chart in the figure).

By 2050 it is a given that technology will have evolved much more making PV better than fossil fuel in terms of cost per KW. How is it that forecasts are not seeing 100% of PV penetration (look at second figure) by 2050 but a good, yet small, 11%?

I am talking about PV because so far, and in perspective, it is the best renewable we can have, since the Sun will be shining for a few billion years more and the amount of energy we receive any day on the Earth surface is way bigger than our needs:

By 2050 we are going to have a mix of renewable sources (as we have today, including wind turbines, geothermal, hydroelectric,...) and they are likely to make a significant portion of the energy sources used:

Unfortunately, energy usage effectiveness is also dependent on two other factors that do not go hand in hand with renewable: density and continuous availability. I'll deal with this in the next post.