Looking ahead to 2050 - Autonomous vehicles I 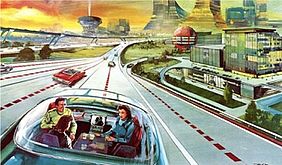 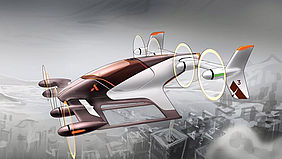 I still remember in 1969 after the first Moon Landing the enthusiasm on magazines and newspapers depicting a future of autonomous vehicles, flying cars as the reality of the world in the year 2000.
The year 2000 came and it is long gone, yet cars still have drivers and there are no flying cars.

Yes, in 2017 we have a few self driving cars, but they are mostly for experimentation purposes. There are some truck platoons on the road, but again, very few. Airbus has recently announced a "flying car" that will be ready by the end of 2017.

What is really new, with respect to 1969, is that electronics has now permeated all cars and there is a clear trend towards making cars more and more autonomous. Technology has matured and in a way it is down to cost and culture. Fifty years ago it was just a dream, technology was not available, independently of the cost.

We know that technology cost goes down, and we are quite certain that it will keep going down in the coming decades. A lot of issues to be solved to make autonomous vehicle a widespread reality are addressable by software and this is a guarantee that the solution will be very cheap (given sufficient time).

The "cultural" aspect is quite a different matter. However, I founda few polls on what youngsters like most very interesting . It used to be "owning a car", now it is "owning a smartphone".

I am willing to bet that over the coming decades cars will become smarter and smarter, and we will become more and more used to "delegate" an increasing number of driving activities to the car, starting with parking, then driving in a stop and go traffic jam, then driving on a long highway, then ... simply .... driving.

In this evolution the car will move to from being a personal transportation means to a shared transportation utility.  There will still be, I know, many "personal" vehicles but a fraction of what we are used to today. Car manufacturers are well aware that they will be facing decreasing volumes of sales, and a change in the value perception of cars from their clients. Self driving cars abiding to speed limits do not need to to make 200kmh nor accelerate to 100kmh in 4 seconds. And there is no reason to buy such a car!

May be my grandchildren will choose a car that has great entertainment features, or one that be reconfigured in a blink of an eye to serve different transportation need. Interesting features today as well, but probably not the ones that drive a buying decision.