Looking ahead to 2050 - Artificial Intelligence III 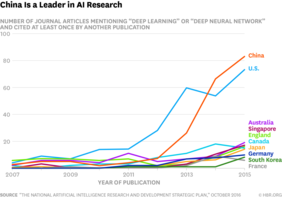 China and US are creating most articles on AI, the graph shows those with at least one citation. Notice that in 2014 China overtook US and how these two overwhelm all other Countries. 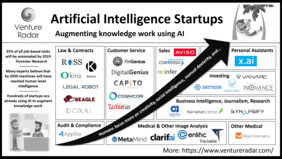 A small subset of start ups leveraging on AI in their business proposition. Credit: VentureRadar

With very few exceptions most scientists and researchers agree that in the coming decades we will reach AGI. There is disagreement on the exact date but it is most likely that this will never happen at a certain date, rather we are (already) entering a grey area where Artificial Intelligence mimics more and more human intelligence in broader and broader areas to the point that the Turing test will be history.

However, the Turing test is about “observational” intelligence. It doesn’t tell anything about awareness and sentient machine. Would a machine that in its interaction is indistinguishable from a human been “feels” like a human being? Will it be sentient? Could it be happy, sad, could it fall in love?

Here the opinions are diverging.

Similarly, what does it mean to us an interaction with such a “machine”?

Assuming that the machine “behavior” is indistinguishable from the one of a human being, will we feel empathy when interacting with that machine? May be not, if it is in the shape of a vacuum cleaner, but what if it has anthropomorphic form?

There are a number of studies in this area, covering both technology and social, psychological aspects. The truth is we are moving into uncharted territory, even though there are plenty of narrative and movies that are dealing with these situations. The point is that we are looking at this from our couch, it is not, yet, part of our reality. What will happen when we will be confronted by this?

Again, it is likely that we will never be confronted with this. It is much more likely to happen through unnoticeable incremental steps, each one so close to the previous and to the next that we won’t be noticing. Then all of a sudden the world will be different.

The Obama administration has launched a study in September 2016 on the impact of Artificial Intelligence on business and society.

The report is interesting but it considers AI as a tool, a fundamental one, whose side effects might be similar to the landing on the Moon. It points out the pervasiveness of AI in the future but does not go into the psychological implications.

Personally, I feel that this is one of the most important, yet difficult to foresee, impacts of AI.

I will come back to this when discussing another trends towards 2050, that of Symbiotic Machines.

Notable the engagement of China in the evolution of AI, pointed out in the Obama report. As of 2016 China is investing more and is leading in cited publications in this area, one of the sign of the value of their effort and results. In 2014 China overtook US in terms of cited publications and both China and US are ahead in this area (see graph).

Another heated debate is on the impact of AI on jobs. Forrester Research estimates that 25% of jobs-based tasks we had in the first part of this decade will be automated (and disappear) by the end of the decade. In a panel at CES 2017 organised by Fortune there was agreement that AI will take over many jobs, but at the same time it will create plenty of new ones.