Looking ahead to 2050 - Artificial Intelligence I 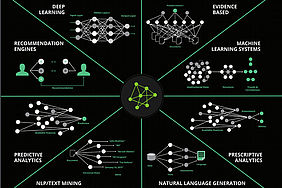 Several technologies are converging and flanking one another giving rise to an ever more refined and powerful artificial intelligence. The artificial intelligence ecosystem runs from predictive analytics to deep learning systems that use complex algorithms to perform more abstract tasks such as recognizing images. Image credit: Narrative Science

Fraud detection is an area making use of artificial intelligence technologies and results is very fast reaction. In the picture this is compared to the reaction time of a blink of an eye, a Google search, an helicopter rotor rotation and airbag inflation, with fraud detection being the faster! Credit: Beebom

Artificial Intelligence, "in practice", goes back to the early days of computers. In the 1960ies the computer was called "electronic brain" underlining the idea that it will become like a brain. We have seen over the last fifty years periods of excitement followed by disillusionment. The achievement of intelligence proved an elusive goal, just around the "next" corner but it never materialised.

In the last few years we have started to see smarter interactions with machines and we have in a few cases caught by surprise by some "intelligent" response by machine, like move 37 in the second match of Go played by AlphaGo vs Lee Sedol in March 2016.

Artificial intelligence, in a way, has also faded in the backstage, and this is good because it shows that it is really becoming an everyday component of our life. Think about Siri, or the search of an image by showing an image to Google (uploading a photo to find a similar photo), face recognition in some photo organising applications like iPhoto, handwriting recognition using GoodNotes, profiling movies to fit our taste on Netflix and songs with Pandora. These applications are making use of Artificial Intelligence, even though we may not realise it.

AI hasn’t just got very useful it has shown that it can be better than our “embedded” intelligence. We got used to have machine being better than us, like being able to lift heavier weighs, move faster, be more accurate and so on. But that was considered as an improvement to our atoms, our muscles and we were never really bothered. With AI it is like machine, atoms, are becoming better than our “soul”, the thinking part of us that we have considered, because of philosophical bias, as different from atoms and specific of human kind.

Well, it turns out that AI today can best (the majority of) us at playing chess, go, poker, recognizing faces, extracting meaning from complex text, translate from one language into another.

However, it is a sort of narrow intelligence. The machine that would defeat us at chess is not able to create a joke.  This is why what we have today is a subset of AI, sometimes referred to as ANI – Artificial Narrow Intelligence.  But that is going to change in the coming decades.