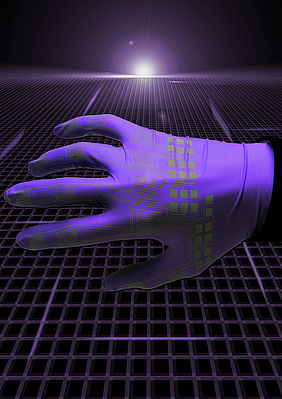 All metals are liquid over a certain temperature. We usually associate metals with a solid since most of them liquify at temperatures higher than the ones we experience every day. Mercury, on the other hand, is usually perceived as a liquid and indeed it gets solid only below -38° C.  Phosphor gets liquid around 44° and gallium around 30°.

All metals are good electricity conductor (by definition....) and researchers have been looking at using them to create electronic circuits that would be flexible thanks to the "liquid state" but the main stumbling block has been the manufacturing process.

Now a team of researchers at the Purdue University have found a way to use an ink-jet printer to create circuits made of a gallium-indium alloy.

The problem is that a liquid alloy like gallium-indium would stick on the ink-jet nozzle making printing impossible.

Here comes the invention of the Purdue team. They have discovered that by mixing ethanol and the alloy using sonic ways they can create nanoparticles of the alloy that no longer stick and can therefore be printed. Once printed the ethanol evaporates leaving the alloy to serve as circuit.

Actually, the nanoparticles of gallium-indium are slightly oxidised, and this makes them an insulator, rather then a conductor. But the researchers have found out that the insulating sheet on each nanoparticle is so thin that a simple pressure breaks the oxide layer turning the alloy into a conductor.

This has actually proven to be a bonus, since it becomes possibile to print the alloy on a larger surface and by selectively pressing it in specific places turn it into the desired circuit.

The liquid metal provides the stretchability that makes bending possible so that it can be used for soft skin robots, as well as for wearable to monitor a patient health parameters.

Most importantly, the manufacturing cost is low and tis makes the solution economically viable.

The technology is also an enabler for the creation of smart materials by embedding sensors on a variety of objects surfaces.