Leveraging on the opposable thumb 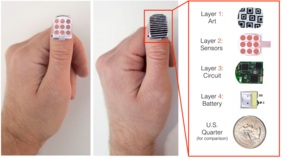 The first NailO prototype with Rigid PCB and copper printed electrodes. It can be personalized with a top nail-art layer. The 4 layers are shown individually, stacked on top of each other. Credit: MIT

Researchers at MIT have decided to upgrade our thumbs by layering on their nails an electronic circuit that can be used as a trackpad.

According to Cindy Hsin-Liu Kao having colourful decoration on thumbs is becoming a common, fashionable, trend, particularly in South Korea. These decoration are relatively thick, consisting of several layers of enamel. Why not put to use these layers?

Ditto, Cindy and a few other researchers working at MIT have developed a trackpad that can sit on a thumb nail. The thumb-trackpad can be used easily by the fingertips of your other fingers (try if you don't believe).

To create the trackpad they have overlaid a half millimetre battery, an electronic circuit, a sensors layer and a decoration, to keep fashion prominent.

By touching the decorated thumb nail you activate the circuit (it is important to keep the circuit inactive when not needed to save battery power) and by swiping your fingertips on it you create a signal that is interpreted by the circuit and transmitted to a nearby device, like the phone in your pocket or a television/computer.

This is reinforcing the trend towards wearable sensors, although it is too early to say that it will ever become a product.

In the report they are not clarifying how you are supposed to "recharge" your thumb ... I wouldn't look forward to stick it in the mains for half a hour!

I remember talking about the shrinking of computer at the end of the nineties and showing a slide where the trend was from desktop to laptop to palmtop (tablet) to nail-top and finally to lens-top (on your cornea). Nice to see we are on track!