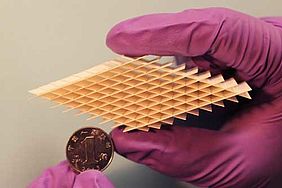 A paper-based device inspired by the Chinese and Japanese arts of paper-cutting that can harvest and store energy from body movements. Credit image: American Chemical Society

In September 2015 I posted a news on work done at the University of Michigan to create solar cells that could track the Sun. The tracking was made possible by the particular structure of the cell surface that got inspiration from Kirigami, the ancient art of paper cutting (Origami is the art of paper folding).

Now I have stumbled onto another news, coming from China, where researchers at the University of Beijing in cooperation with teams at the National University of Taiwan and Georgia Institute of Technology have leverage on Kirigami to create self charging power units for self powered electronic and medical systems.

They used paper as a substrate to create a power unit that can both harvest and store energy leveraging on body movement.

The team in China has been working for several years on triboelectric nano-generators (TENGs), micro devices that can transform energy of movement into electricity (similar to piezo-electric devices that transform pressure in electricity). The problem is the low power being generated with this approach.

They turned to Kirigami and created a a structure made with rhombic paper cut a few inches in length that gets distorted by movements. These distortions generate electricity thanks to a layer of fluorinated ethylene propylene film overlaid on the paper. Additionally they covered the paper with gold and graphite sand paper to create a super-capacitor that accumulate the electrical energy produced. A single device can accumulate 1mF at 1V in few minutes, that is hundreds of time better than previous devices based on polymers.

This quantity of energy is sufficient to operate a remote control, a watch or a temperature sensor.

The scavenging of energy (harvesting energy that is around in the ambient, like the one produced by our walking) is getting more and more important as sensors are getting less and less power hungry. The tiny energy that can be harvested through scavenging becomes sufficient to power many types of sensors and in turns this makes their use practical. In the next decade the number of sensors will skyrocket, both on our bodies (in our dresses) and in the ambient, like in urban environment. Finding a solution to power them is essential.