Lending your brain to a robot 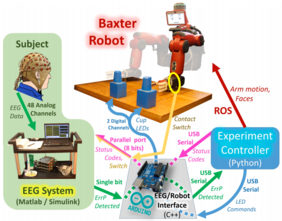 The experimental system developed at MIT to use a person brain to interact with a robot includes a main experiment controller, a Baxter robot, and an EEG acquisition and classification system. The goal is to make the robot pick up the cup that the experimenter is thinking about. An Arduino computer (bottom) relays messages between the EEG system and robot controller. A mechanical contact switch (yellow) detects robot arm motion initiation. Credit: Andres F. Salazar-Gomez et al./MIT, Boston University

Working in teams in a production environment  is the normal way to maximize efficiency and share competences. Workers in a team interact with one another, sometimes verbally (or in writing) to share information, sometimes just by exchanging glances. And it works pretty well most of the time. I got a nut in my hand and a co-worker lends me a wrench. It is like using telepathy but as a matter of fact is about sharing the same context and perceiving subliminal hints.

What if one of the co-worker is a robot?  Today most robots work in isolation from humans (there are often fences to ensure safety and avoid unwanted interaction with the machine) but in the future robots are likely to become part of the team and interactions will need to be seamless, as it is today among human workers.

This is the goal for a team at MIT (CSAIL) and Boston University who are using Baxter (a robot that has been designed by Rethink Robotics to operate as a coworker and be easy to train by its fellow workers.

They are trying to use a brain to robot communications to interact with it, retrieving brainwaves through a helmet with embedded pads that capture electrical signals generated by the brain as part of its “thinking”.

The experiment so far is pretty basic. It aims at conveying to the robot the message "you are doing right" or "you are doing wrong". The (human) co-worker observes the robot and see if it makes a mistake. This mistake detection by the robot generates brainwaves that are captured by the helmet (along with thousands of others...) and analysed by a software that singles out the message and conveys it to the robot.  By being told that it made a mistake the robot learns and improves.

Clearly we are pretty far from a real cooperation brain-robot, and the use of a helmet is not particularly attractive on a workplace (particularly one with plenty of wires getting out of it to connect to the computer). Nevertheless it is interesting to see researchers working in this area.

As the Chinese Laozi philosopher said "a journey of a thousand miles begins with a single step".  Indeed, many more will be needed to see the end.