Lending "our stuff" to robots 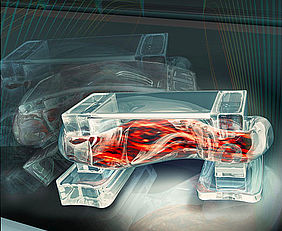 We have become accustomed to the idea of embedding of prosthetics into our body and to the fact that these are going to become more and more smart (smart pills, smart chips, eventually micro-robots).

Scientists and researchers are also looking into the opposite direction: embedding bio-materials, like cells, into a robot to increase its performances.

This is what this news is all about: using animal cells to create artificial muscle to operate a robot.

The problem engineers are facing with providing robots with movement is that motors that make movement possibile are heavy and bulky. It is ok if your robot is sufficiently big but if you want a robot in the mm size a normal motor would not do, particularly if you need to have several of them to prove the variety of motion capabilities you require from, as an example, a hand (it takes at least 20 motors to get the same kind of motion latitude you have in a hand...).

One solution is to have a smart material that can contract and extend like a muscle under an electrical stimulus. Indeed a few smart material based "motors" have been tested and a few are already in use. They are still way less efficient than natural muscles and this is why a team at the University of Illinois at Urbana-Champaign has looked into the possibility to borrow muscle cells and use them to create a bio-motor for robots.

They have been able to demonstrate that, indeed, it can work. They have been using 3D printers to create an hydrogel scaffolding for the inclusion of muscle cells. They are activated by an electrical signal whose frequency (see the video clip) commands the rate of movement.

They feel that this approach can make bio-bots feasible in the near future. They managed to develop this kind of bio-motor already in 2012 using cells taken from the heart of a rat but those cells contract at a fixed frequency. Now they have found a way to use skeletal muscle cells and to make them contract at the desired time.