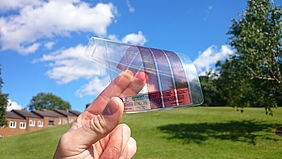 Moths fly during nighttime and had to work out a way to see where they are going. Hence over million of years evolution has provided them with eyes that can detect a much broader spectrum of the electromagnetic field (light is an electromagnetic field, our eyes can see just a tiny portion of it between 390 and 700nm).

Researchers at the University of Surrey have created a multilayer graphene texture that can capture with very high efficiency the energy carried by electromagnetic fields.

There are plenty of electromagnetic field all around us. Your cell phone is emitting an electromagnetic field, a weaker one than the fields you are swimming in and that let's your television show comedies and news or the one generated by the fridge motor, or the one generated by power lines in your home and so on and so on (if you feel like getting scared take a look at the variety of EM fields from everyday appliances, but remember that there has been no scientific proof that any of that is creating health hazard!).

Point is, most of this EM goes wasted. Only an abysmal percentage of the power used to broadcast a television program ends up being used by televisions all around a region served by that antenna. So why not trying to scavenge these EM and put them to use?

The problem is that these EM fields are weak (and that's good, so that they do not have any impact on our health) and harvesting them does not yield any usable power.

That is what the researchers at Surrey university have worked on: creating a system that can harvest those weak EM fields yielding usable power. And to do that they have looked at how moths capture the EM field.

The ultra-thin multilayer of graphene they have creates, 15 nm thick, can absorb 99% of the EM field in the spectrum from infrared to ultraviolet. This has been possibile by creating nano-structures that mimics the ones found in the retina of the moth.