Lack of fibre is no excuse... 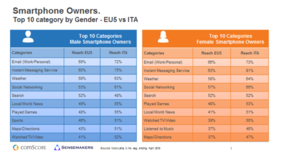 Italians are more connected in terms of mobile service usage than many of their European siblings... Credit: Comscore and Sensemakers

I was part of a Panel looking into the crucial role of an advanced optical infrastructure to support the Data Economy.

Panelists came from institutions in Italy, Parliament, Communications Agency, Province… and they were all in synch on the need to push  deployment of the optical infrastructure. And proposed various ways to make it happen, to convince Operators to invest more money, to have the Government supporting (fiscally or and with dedicated funds) the deployment.

Someone stated that broadband is a fuzzy term, in some Countries 20 Mbps qualifies, in other less than 100 Mbps is not considered “broad” (that’s apparently the case in Sweden).

Now, I think we should reflect on this 8%. It means that out of 100 people that are reached by the broadband infrastructure only 8% chosen to connect and use it.

Let’s face the fact: this panel would have made sense 10 years ago. I found it having very little value, and sense, today in 2015 when most of Italian people use smart phones (60% of Italians own a smart phone, Mobilens stats).

eGovernement services exist, unfortunately they are not “citizen-friendly”. Getting the authentication to access Government services is a nightmare, you need to try to appreciate it!

Once you have the authentication (and you run out of it every three months… and you need to start all over again) and you enter into a web site to use a service you feel completely lost.

There are promises to get a unique digital identity for all citizen’s service by next year. We’ll see. I am not optimistic though.  Our relation with the Government (and Institutions) is rooted in paper shuffling. Moving the shuffling on the web just makes it worse.

Access is not an issue. With a smart phone you should be able to carry out most chores, provided you have well designed applications. And it is surely cheaper to develop good applications than to deploy an optical network.

Asking, and waiting, for a better fiber infrastructure is just a convenient way to avoid facing the real issues and solving problems.

This is something that should also be “digested” at EIT Digital when we look at Innovation Activities. We should innovate with what exists, and there is plenty. We should not first invest on creating something so that it will be possible to innovate “tomorrow”. Today is the right time for innovation and it is the only time where we have an impact.