Just another way to track you! 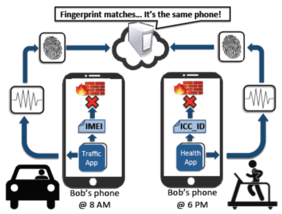 Bob uses traffic and health Apps supported by the same cloud backend. Even when devices Id are blocked, exporting a slice of sensors data is enough for the Cloud to detect the data are coming from the same device. Credits: Sanorita dey et Al, University of Illinois and University of South Carolina

As privacy awareness grows people are getting more cautious about their identity being tracked and the smart phone in your hand can be configured in such a way that in using apps it does not reveal who you are. Can it?

Well, it turns out from a study carried out in cooperation at the University of Illinois and the University of South Carolina that small imperfections in the accelerometers used in the smart phones can provide a unique signature of the phone and hence allow its identification.
In fact, data from the accelerometer are not blocked, since they have never been considered as a potential source of identification.

This shows how tricky it is to maintain privacy in the mobile world. There are so many data involved and the cross relation among them can lead to the emergence of the unique identity of the smart phone and tied to this to the identity of the user.