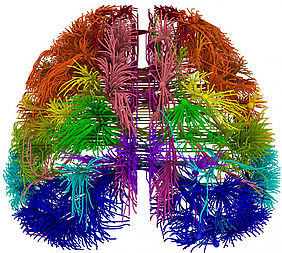 When I first glanced at the figure I immediately recognised our brain, but I got it wrong: it is showing the connections of a rat brain. Still quite similar to ours, but just in terms of connections, since our brain has over 1,000 more neurones than a rat brain (100 billions vs 75 millions).

The mouse brain is the first mammalian brain to have been completely analyses to map its (main) connection network. This has been done by the Allen Institute for Brain Science that has just released a Mouse Brian Connectivity Atlas. As you can see the connectivity shown in the figure is remarkably similar to the one of our brain. However, this similarity (that add one piece of evidence to the evolution theory, if ever one more was needed) is at the macro level.

Mapping the real network of connections of a mammalian brain is still bend present technology. So far the only complete connectivity map we have got is a tiny fragment (measured in hundreds of microns) of a retinal tissue. Scaling this to a mouse is still a staggering endeavour and scaling it up to the human brain even more so.

Still, we are on a roll and it is just a matter of when. Probably in the next decade we will have a comprehensive mapping of the human brain and in the following one a "complete" one.

Beyond the staggering complexity and the amount of processing power (and related storage capacity) i see two main stumbling blocks ahead, similar, but trickier, than the one we saw on the human genoma.

At the same time the genoma represents the genotype that in turns is clearly connected with the phenotype but it is not the same and we still have very little understanding about this connection (in other words we know amazingly little about what codons mean in terms of emerging characteristics, like blue eyes or a certain syndrome). Clearly, as we get more genome to compare we can try statistical analyses to spot what differences are relevant and what they are leading to. Still many years before we can hope to have a clear understanding of the relation genotype-phonotype.

I guess you see the point. When in twenty years time (my estimate) we will eventually have the first comprehensive and complete connectivity map of a yuma brain it will be about that specific brain, had scientists chosen a different one they would have end up with a different map. How can we extract from the maps that will be progressively created the abstract "human" connectivity map (in the same way that we say that the map in the figure is the mouse brain connectivity map?

It is reasonable to presume that a map of a human brain will be very much simile to the map of another human brain, much more than to a map of a whale brain... but it is just as assumption and to work out where we should look to find similarities is pretty hard. Consider, that, differently from the genoma that is the same in any cell of a person and remind the same though out his life, the connectivity network of a person keeps changing through his life. Hence it is quite more challenging to derive an abstract "human brain" map.

Moreover, is there any hope to move from the connectivity map to the memories and emotions of that brain? It is a bit like moving from the genotype to the phenotype, but with several orders of magnitude of complexity. IN the genome case it is about the activation of genes to derive the proteins and from there the overall effect (immensely complex but linear, in a way).

In the brain it is about computing the set of sets, the states, and this leads to an explosion of possibilities, more than the number of atoms in the universe! (in both cases, genome and brain connectivity, there is more to it than the codons and neurones/dentrides-axons. The overall chemistry in the cell on one side and the neuromodulators in the other also impact the outcome).

Interestingly, most of technology (and in a certain sense of science) is about abstraction, being able to make predictions and  deriving useful information using a simplified subset of reality. This is what happens in any field (think about making weather forecast without the complete knowledge of the dynamics of each molecule in the atmosphere...). However, when we talk about ourselves as expression of genes or as human thinking beings it gets, perceptually, more difficult.

We are moving, I feel, away from science into philosophy. I wonder what Plato, Kant would say with today's knowledge. And what fascinates me is that our progress in science does not make philosophy fade away, on the contrary, the central questions addressed by Greeks 23 centuries ago still stand.