It is all about scattering 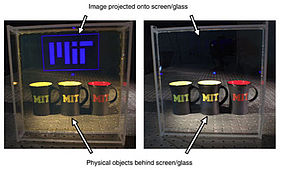 We can see the world around us because lights gets scattered, reflected, when it hits object surfaces and part of that reflected lights find a way to our retina. Interestingly, long time ago men believed that seeing was the consequence of our eyes "looking at" (illuminating) the objects and not the other way around.

An example is your car windshield: you sit at the wheel and you can see what's on the road.

What if you want to display an image on a transparent object? Well, it is impossible, by definition! However, if you can have an object that lets most wavelengths go thru but reflects just a few wavelengths than those wavelengths becomes visible and at the same time the wavelengths reflected by objects on the other side of the screen can pass through it so that we can see the objects.

Materials that let most wavelengths go thru and block just a few ones are called "translucid". We have many examples of them, actually very few materials are completely transparent to visible lights, a tiny bit of it is always reflected.

That is how HUD (Heads Up Displays) used in cars work. A projector sends a beam on the windshields and we can see information displayed on it. However, the quality of the reflection is poor and consequently the image we see on the screen is not that good (looks like a fading image). Getting better images would mean to decrease the transparency of the windshields and I bet that is not something you want!

Now a team of researchers at MIT have found a way to use silver nano particles embedded in a glass to reflect with a high accuracy very specific wavelengths (the blue one in the picture).

The researches have been exploiting this characteristic of nano particles to create a glass pane that is completely transparent to all (visible) wavelengths except to the ones scattered by the silver nano particles embedded. In the case of the picture the nano particles reflect the wavelength perceived as blue by our eyes.

The interesting thing is that the nano particles size determines the wavelength affected in a very precise way. Hence only a very tiny spectrum is reflected (scattered) all the rest goes thru. Hence, the researchers believes they will be able to embed three types of nano particles (three sizes) to reflect exactly the three primary colours (red, blue and green) thus creating all gamuts in terms of our eye perception. At the same time all other wavelengths will still go through and therefore the screen will preserve its transparency.

It should also be notices that whilst current projection on a translucid screen results in a (faded) image that is only visible if you are looking the screen at a 90° angle (or very close to it) in the case of the glass with embedded nano particles the image can be seen over a much larger field. This is because the translucid screen reflects (partly) the wavelength hitting the surface at a 90° angle whilst in the case of the glass with nano particles these scatter the wavelengths in all directions.

It may take a few more years to see these new kind of screens but they are bound to succeed, since they are effective AND cheap to manufacture! And along with them we are going a further step in the direction of mixing atoms and bits, and enabling new biz and a new perception of the world.