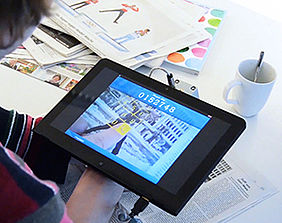 Metaio’s Thermal Touch prototype uses a thermal camera to sense touch and a regular digital camera to track where the touch occurred, allowing many objects to serve as interactive touch surfaces. Credit: Metaio

The future will see a seamless interaction among everything in any ambient. Of course, part of this interaction will see ourselves as one of the interacting party and objects as the other.

The technical challenge is how to make this interaction possible in a seamless and affordable way (very low cost) taking into account the variety of objects.

This is where the research carried out at an augment reality company, Metaio, comes handy.

They are working on a new approach to identify where you place your finger on an object. They call it Thermal Touch, and with a reason. They are using the thermal signature left by a warmer object, like your finger, on a colder one. The flow of heat from the warmer surface to the colder one leaves a warmer spot on the the object and this spot can be identified using a thermal camera. An additional camera, operating in the visible light, provides the image of the object that is processed by an image recognition software to map the information coming from the thermal camera onto the actual object surface.

The two cameras are bundled into a single device, Optris PI200. Although today this is packaged as a separate device (and it is somewhat bulky) in the near future this approach can found an implementation that will basically become embedded in a variety of devices, including Google Glass. Wherever you have today a digital camera you can well see it becoming coupled in the future with a thermal detector and along with the appropriate software this can result in a seamless detection of where your finger is touching an object, hence the starting point for the interaction.