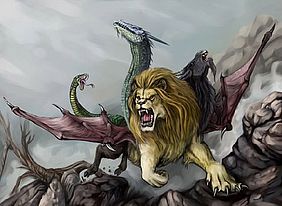 The Chimera was a mythological beast with many heads. It is often used to represent a disillusion, something that does not exist and whose search will never succeed. I liked the pairing with 5G because of the many heads a Chimera has, something that is in common, in my view, to 5G. 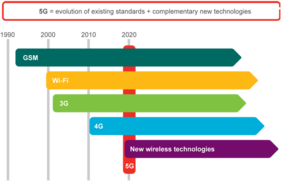 The roadmap towards 5G according to Ericsson. There are quite a few roadmaps around, and they all place the availability of 5G in the next decade. Credit: Ericsson

I run recently into an article "5G follies: the network that doesn't exist". The sub title was also quite impressive:

There is no 5G technology, no 5G standard, no agreement on what 5G even means, and thus nothing to plan for.

The text of the article goes into detail and I have to say there is quite a bit of truth in the argument. However, I feel there are also a few misconceptions.

As an example, one of the goal mentioned is the squeezing of more bits per Hertz. This is not a goal of 5G, although technology is looking for ways to go around the Shannon limit (that constrains the number of bit per Hertz as a function of power and noise) by using parallel transmission of the information through several antennas (MIMO - Multiple Input Multiple Output) and this is already being done in 4G and in WiFi.

What I see is that we have today a variety of radio technologies being used every day, thin about 3G/4G, WiFi, Bluetooth, NFC, satellite comm, not to mention broadcasting services.
Devices have been limited by power consumption and processing power in hooking on more than one communication system.

With the increase of processing power and parallel decrease of power requirement we have seen devices like our cell phone becoming capable of managing, in a seamless way, several radio bands, hooking up on GSM, 3G, 4G frequencies. More recently we have also seen smartphones seamlessly deciding to transmit data on WiFi or through a cellular network. So seamlessly, in fact, that a few people complained that the latest release of IOS could swap from a WiFi network to a cellular one if it detects that the signal on WiFi is slowing down. This is done without the user being aware and leads to possibly unintended usage of the available data package with an increase in the monthly bill.

In two years time the chip at the core of our smart phone will have sufficient processing power to be able to hook onto any radio communications path that might become available. More than that.
Software will be able to manage this broad access capability within a single session. You may start a call using the 4G network and within the call as your service requires more bandwidth and you happen to be within reach of a WiFi network part of your data streams may flow through the WiFi, whilst other part may stay with the 4G. Additionally, if you happen to need "bits" that are stored in a nearby phone or media centre, your cellphone may hook up with that may be via bluetooth.

You won't need to stop your communications because you have reached a point of sale and you are going to use the NFC of your phone to get info on a product or pay for it. Everything will be seamless.

In a way there is nothing new, "architecturally speaking". The 30 years old ISO layers were designed to separate application and session from network use...

Now, for me this is 5G, a seamless use of whatever resource becomes available as need arise.
The crucial point is the "seamless" part. We have the conceptual (ISO) architecture but much more is needed, also in terms of standardisation.

But I think it is  mistake to believe that there will be a precise point in time when 5G will be cut off. In a way it is already starting, in a very crude form, as you enter your home and your phone switches onto WiFi for data communications. But just because you have a smartphone with this feature.

We will see a growing number of communications features being provided by our smartphones and we will be using them seamlessly. The network, on its side, will continue to grow in capacity and in radio drop diversity. Some of us will be experience 5G sooner than others, but because we will have decided to buy a new smartphone generation, not because in our area the Operator has deployed a new antenna or a new technology.

This will happen, of course, but it will be an evolution of the overall network, not a transition that can be compared to the shift from analog to digital (1G to 2G) or from circuit to packet oriented communications (2G to 3G) or to IP signalling (3G to 4G).

You will no longer hear talking about 5G coverage... The coverage will depend on your terminal. Of course, the variety of access points available, and consequently the capacity at your disposal will depend on where you are...

At least, this is my pick.