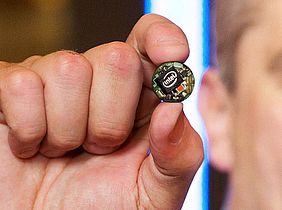 Here is one: Intel Curie.
It was announced in 2015 and it was shown as part of a bracelet, hinting to its use for a new generation of wearable devices.

The Intel Curie embeds in a button size (and shape) a 32 bit computer with 384kB of flash memory and 84kB of RAM, a six axis accelerometer and a gyroscope allowing gesture tracking (and recognition by software), Bluetooth communications and circuitry for charging the battery (also included).

Now at CES 2016 the Curie is ready to ship and power the Arduino 101 board, at a cost that has not been announced but that we can infer to be pretty low, since the full Arduino board is priced at 30$.

Good to see that there is more than vapourware!

The Intel Curie can power a wide variety of of Things connecting them to the Internet of Things (IoT). It has a (relatively) limited processing power and storage capacity but it is more than enough for many applications and its cost makes it affordable in several areas.

One more indication that IoT will become pervasive.