Future Smart Cities will be aware, they will have to perceive the status of its various components and understand the global picture to orchestrate the overall behaviour. Credit: UCSB 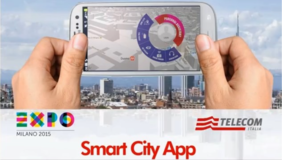 Augment Reality through the Smart Phone can personalise information. Quite a bit of work has been done by Telecom Italia Join Open Lab in Milan for the Milan 2015 EXPO. Credit: Telecom Italia

I considered the evolution of technology, let’s now consider their impact in terms of transformation of our cities into the cities of the future.

Clearly we have different cities today, and we will have cities quite different from one another in the next decade. The future is not going to bring us clones of cities. They will be smarter than today, but smarter in different ways,

However I think we can pinpoint a few characteristics that  will distinguish smart cities of the next decade from today’s smart cities.

The first characteristic is Awareness.

Both cities and citizens will be aware of what is going on in the whole city context and because of that they with adjust their behavior consequently.

Clearly, traffic condition is the first thing than comes to mind. By knowing the overall traffic and the historical data one can make accurate predictions that in turns can influence the traffic management at city level (e.g changing the duration of traffic light, changing indication of direction to reach a certain destination, closing or opening lanes…) and a citizen level, providing customized alternative, stimulating the use of public transportation (e.g. with a message of free parking today in a given place by riding a public transport) discouraging the use of specific streets by charging a right of way…

Obviously, if people are informed in a personalized way of the options available to get where they want to go with the indication of the fastest or cheapest way they will tend to follow the implicit advice.

The awareness of single citizens can be harvested and transformed into the awareness of a community, small and large. In general people tend to be gregarious and by letting know in a community the choice of a few of their members is likely to steer the whole community in one direction.

We will be moving in the next decade from apps that inform people about events to apps (or better scanscapes) that will inform people of the feeling and heart beat of city areas and communities, in a way from hard facts to emotions.

The second characteristics is “personalization”. Today cities are what they are and we are sort of visitors that are confronted with a reality that has been designed “not for us”. In the next decade cities will be much more flexible and will be able to interact with single people in customized ways. The easiest way to achieve this is to rely on the person’s smart phone as the leading interface. By looking at the city through its screen the cityscape will be supplemented by information that are relevant to me, as a single individual. The magic will be achieved through the cooperation of my smartphone (that knows about me) and data repositories available through the city (possibly using the data buoys I mentioned before). Progress in semantic analyses will let applications understand what data means and more importantly what they can mean to us.

We already have seen several Augmented Reality Apps, most recently at Milan EXPO 2015. An app, 3cixty, provided a semantic analyses of several data streams generated in Milan through the EXPO and customized the results to the user’s profile.  The results from its use by thousands of people over the last six months indicates that this is the way to go although it also pointed out that significant progress is needed to come to a semantic analyses au pair with the one any one of us can do (to make sense of information).

The third characteristics is a most important one, from the design point of view of a smart city. Cities are living beings, however their rate of change covers many decades, or so it was in the past. Building roads, getting rid of old buildings to construct new ones is not something happening overnight. It takes a lot of time.  Hence it is no surprise that a city has a very slow evolution.

On the other hand cities, as many other “things”, are becoming more and more software based, and software has a much more dynamic life cycle.  We can expect our cities to change at a faster pace in the coming decades, particularly in terms of functionalities, and aren’t functionalities just another term for “smart”?

We need to design our smartification process to be more than a change: it has to be a support for change. Smart Cities will become springboards attracting innovation, biz (the two are strongly related) as well as dynamic cultural experience, ever changing communities.

It is likely that, similarly to the way we gauge enterprises today, we will measure the smartness of a city in terms of its capacity to evolve, and that will basically equate to its capacity of attracting innovation.

This is the reason for the title of my talk today. Innovation fostered by the city and innovation as a metrics to evaluate the smartness of a city.

Yes, a city is smart if it serves well its citizens with the minimum resources, but needs change and in order to keep being smart, and becoming smarter, the city has to change and changes happen through innovation. Innovation is a fall out of a vibrant business and innovation stimulates new biz. And we know that, at least in a loose way, biz relate to the wellbeing of the citizens.