Innovation in Smart Cities of the future - Part IX, The Players II 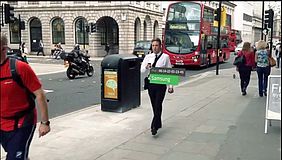 As people walk by a smart bin with a phone having an enabled WiFi the bin captures its MAC address and can discover the make of the phone plus a few other data. This cast a big shadow on privacy. Credit: Presence Orb

Citizens are clearly the ultimate beneficiary of the Smartness of a City. In theory, they should be the ones setting the goals, since in the end they are also the ones paying for the evolution.

Thanks to the Internet and the smart phones it has become more and more feasible to get a continuous hot line with citizens, as single individuals and as communities. They can provide almost real time suggestions and feedbacks. Their collective behavior can also provide indication of where issues are (length of queues, time spent on private vs public transportation, usage of garbage bins…).

The ease to create apps has made these interactions easier. It has also transformed citizens into active players that can “do” things and by doing they can make the city smarter.

Never before has it been possible to involve this much these many citizens. Hence the cultural aspects are even more important.

More recently we have seen the possibility to transform citizens into active players. However, the involvement of citizens brings to the fore, more than ever, the issue of privacy.

Renew London partnered with Presence Orb to track people getting closer to one of their recycle bins. The idea was to get to know more about people moving around. They anonymised data (the identification was through the MAC address captured by the smartphones that had the WiFi on) and planned to resell information to stores and advertising companies. The concern for privacy breach was too strong and the Municipality stopped the trial.