Tesla car owners will have to update their car software by downloading the new version from the web. Credit Tesla 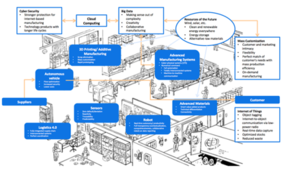 The production chain is getting more and more complex reaching out the end customer. Credit: DCVision 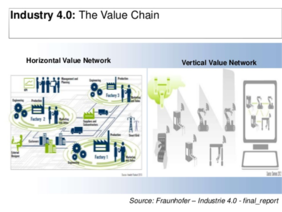 The evolution of manufacturing has been tied from its very beginning, 6,000 years ago, to technology. First it was about shaping stones, then smithing. WIth the industrial revolution the power of a worker could be multiplied by machines powerd by steam. The second revolution, roughly 100 years ago leveraged on electricity, the third is still undergoing and it is based on IT and electronics (robotization of production). Whilst the first two revolutions created millions of jobs, moving people from agriculture to manufacturing, the third revolution has decreased the number of jobs for both blue and white collars. It is a revolution that is taking place within the established value chains making production more efficient and decreasing the transaction cost along the value chain. The more stringent rules enforced between suppliers and manufacturers have made newcomers entrance more difficult.

We are now seeing the signs of a fourth revolution, in Europe called Industry 4.0. It is a revoution that affects the whole value chain, both the supply and the delivery side, extending manufacturing along the whole chain, up to the end user that becomes an integral part of the manufacturing process.

Sometimes Industry 4.0 is associated to smarter robots. Although we will have smarter and smarter robots, this is not the point. We already have plenty of robots in manufacturing and having them become smarter over time is just a natural, linear, progress. The revolution lies in the different interplay of players along the whole value chain and its extension to the end customer/user. The interactions among the players in the value chain will be bidirectional in a manufacturing sense (it has always been bidirectional in administrative sense) with any player being able to affect and steer other players production. More than that. The value chain will lose its rigidity to become the result of an ecosystem interplay, in part strongly regulated by contracts and in part operating in an open innovation environment. This latter will began in the software part of products and it will extend, with the ubiquitous availability of 3D printers to hardware components.

IoT will play a significant role in the manufacturing process, and a possibly more important one will be played by Soft IoT.

Cars, today, are a bunch of computers with four plus one wheel, the steering wheel on the way to be dismissed.

I already mentioned the transformation of the value we perceive in a car, from ownership to pure use as a service. There is also another aspect, and this is related to Industry 4.0.

Imagine buying a car. You go to a car dealer and select that fancy car because it is pink and has a nice shape. Then you furnish it with an engine that can deliver 100Hp. That is more than enough since you are going to use the car on your day by day commute to the office in areas where speed limit is enforced. Of course you’ll pay taxes and insurance in accordance to the power selected.

Now suppose that after two months you come to a day when you need to use the car for a longer trip, may be pulling a trailer. You wish you had a few extra HPs. No problem. You order what you want (by the car dashboard or with your smartphone) and the extra HPs are downloaded onto your engine for you to exploit. Once the need is over you release the extra HPs and go back to the original ones. Of course you have been charged for the extra HPs and you had to pay the incremental tax and insurance for the period you had a more powerful car.

Clearly you cannot “download” 400 extra HPs on a car designed for a max of 200HPs, but you have a latitude of usage to exploit.

You may also want to transform your car from an “office” space to a kindergarten over the week end, and you can buy specific services to transform it.

Your car will exist in two spaces. The road space, your car made of atoms, and in the cyberspace, the clone of your car made of bits. This clone is constantly connected to the real car on the road, but in most cases transactions happens at the clone level. It is the clone that gets info from the insurance company or from the manufacturer for newly available services, and it is the clone that connects to your self in the cyberspace. These are examples of Soft IoT. Most of your interactions will occur on the cyberclone, the real one being involved only when you need to be physically transported from A to B. The Soft IoT representing your car will take the upper hand when the car will become a pure service. You will invoke your soft car and that being a Soft IoT will take charge and look for a real car to be delivered at your sidewalk, customised to the last detail to make you feel “in your car”.

The first industrial revolutions had the problem of managing the high capital cost involved in product manufacturing and keep the product affordable. That has resulted in mass production with high volume so that the manufacturing cost divided onto hundred of thousands of individual products became affordable to the market. This also led to “one size fit them all”. Customisation was too expensive to be practical.  Early cars used to be “black” because changing color in the productino line was just too expensive.

The third industrial revolution leveraging on the flexibility of robotised production has made customisation possible. Look at the many colour of cars we have today. Some cars can even be painted “on demand” (and the extra cost charged is pure margin for the manufacturer).

The fourth industrial revolution by changing the value chains from a highy regulated hierarchical structure into a flatter ecosystem productino environment will create possibile to address the market of one. More than that. This market of one will be addressed by many players, most of them not involved in the main production line.

In a way we are already seeing this happening. Think about your laptop. When you bought it it was exactly the same as all the others being sold on that shelf (same brand and model) and on any other shelf in the world. A month after you bought it you would experience a nightmare were you to lose your laptop. It has become irreplaceable, because it has become unique.

Well, there is a way out: if you did your homework and tool care of backing it up you are fine. Just get another one (yes, it is still anoying having to pay for another) and use the backup to restore “your” laptop.

The “your” part is no longer related to atoms but to the soft side of the product. Once you put this soft side in the Cloud it can operate as a Soft IoT getting update, interacting with the various providers of applications and data that have transformed a mass market product into a unique one.

This Soft IoT can actually govern several instantiation on differnt kinds of hardware. My soft computer is instantiated on my laptop, on my iMac, on my iPhone, my tablet and even on my Kindle.

There is more. The growing use of 3D printers will bring the customer/users into the manufacturing space. The 3D manufacturing on the customer premises, or in some convenient location, like a mall, will likely be driven by software/design provided by third parties. This design will be able to work, fit, because it has been developed based on a mock up in the virtual space, reflecting the products to be upgraded/complemented.

This is going to become an important and interesting part of Industry 4.0, opening up manufacturing biz to a multitude of third parties companies, exploiting the add-on demand as it is being done today but with the possibility to create much more effective combinations.  Here the Soft IoT will play a significant role. It is not enough, in general, to provide a static mock up when you want to create a functional add on. You need to interact at functional level as well, and you need to do that with a product that is no longer the one that has been produced by the original manufacturer since it has since undergone through many updates. As long as these are reflected in the Soft IoT mirroring the obejct one could still design -and test- further adds on on that.