Improved performance through hardware, even better through software! 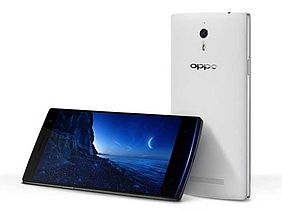 The new smart phone from Oppo, sporting the first QHD display on a phone.

There was some expectations for better displays on cell phones at the MWC in Barcelona last month but they went unfulfilled. Just a month later, however, a Chinese company, Oppo, has announced a new smart phone, Find 7, equipped with a QHD display, which means 2560*1440 pixels - the same resolution you get on a 27" iMac screen squeezed into a 5.5" screen leading to a staggering resolution of 538ppi!

One can wonder if that resolution would be appreciated by our eyes, since it is well beyond the average eye resolution  (estimated around 300ppi). Still there is no doubt that engineers managed to go beyond what were considered practical manufacturing limitations...

The phone, in the photo, has a 13 Mpixel sensor, surely a very good resolution but nothing out of the ordinary (though exceeding the resolution of the display... so that you can easily zoom 3x without interpolation).

What makes the photos taken with this phone way better, in terms of resolution is not hardware but software: the Find 7 is equipped with a software Super Zoom feature that creates a 50 Mpixel image. This is done by taking a burst of 10 shots, selecting the 4 best and combining them into a single 50 Mpixel shot (13*4=52).
Remember that the sensors provides a stats of photons in their three wavelengths (red, blue and green) as selected by the Bayer filter and subsequent shots provide slightly different "stats" that can be processed to increase the virtual resolution.

Hence, thanks to the software we get a much higher resolution, unheard of (so far) in a cell phone (and quite unusual also in professional cameras, the Nikon 800 provides "only" 36.3 Mpixel resolution...).

The overall picture quality, at least as far as one can tell from the photos released in the announcement, is not exceptional. There is much more needed into a digital picture than resolution, including the quality of the lens and the signal noise ratio.

Nevertheless, I was impressed by seeing how software can work around the "physical" limits imposed by the sensor. This is really another sign that we can continue to innovate through ICT going beyond what seems to be hard constraints.