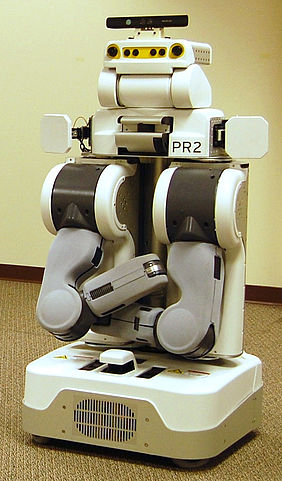 Researchers equipped a PR2 robot with articulated, directionally sensitive antennas and a new algorithm that allows the robot to successfully find and navigate to objects. Credit: Georgia Tech/Travis Deyle

I guess it is not just me... sometimes looking for something at home and not finding it.  And more than once I wished somebody could tell me where I left the key or that screwdriver I happened to use just minutes ago!

Researchers at Georgia Tech might have found a solution: a robot that can find objects in a house or in a office. The idea is simple: use RFID tags to identify objects and let the robot find them by analysing the radio signal.

RFID tags have been on the market for several years and the use of RFID reader can pick up the information it contains. Using them to guide a robot to find an object is not as easy as it might seem. What you do normally is to pick up an object aim the reader at the RFID tag and get the information. The RFID tag needs to be visible in terms of radio frequency not necessarily should be in the line of sight, e.g., the object may be under a pillow and the reader can still read it. Actually, a reader can read many RFID tag at the same time since each can be reached through the radio signal.

What is missing is the location of the RFID tag. You can only say that the RFID is within reach of the radio signal but that does not help in finding the object. I know for sure that the screwdriver in in my home, I was using it just few moments ago but I do not remember where I left it.

Here is where the research of the Georgia Tech team comes handy. They have developed a robot with two antennas that are basically RFID readers. By comparing the signals received by the two antennas they can work out the direction the robot should move to approach the object and the strength of the signal provides clues on where and how far it is.

The solution proposed has the advantage of being simple. The robot will not be able to tell me "the screwdriver" has ended up between the two pillows on the couch... but it will move in that direction and will get closer and closer to the point that it can retrieve the object. The algorithm is just a technical implementation of the old kids-play "cold- cold- lukewarm - hot!".

The researchers are seeing this robot capability to augment their usefulness in a home, as an example in assisting elderly to get a medicine.  Present solutions are leveraging the growing capabilities of image recognition but this is still a very complicated area. RFID might turn out to be a simpler and most cost effective solution...