How do you tell a dog from a cat? 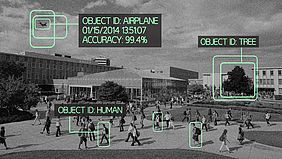 A computer recognising objects in an image. (Credit: BYU Photo)

Well, you just tell! When you are with your toddler you show him a cat and you just say: "look at that cat". On the other hand if a dog passes by you would tell him: "Hey, look at that dog".
And in a little while (a few months, actually) your toddler would tell you "cat" when any kind of cats happens to be around, or "dog" when something doggish wags its tail.

You never had to explain the difference between a cat and a dog so that he can classify them correctly. It is learning by seeing (observing).

Computers work differently, in a way they are stupid. You need to tell them exactly how to tell apart a dog from a cat, and they have to learn the characteristics of dogginess and cattiness, if you know what I mean.

Progress in the area of pattern recognition have been significant, your digital camera can probably detect a smile on a face to snap the picture at the right moment, iPhoto has a quite good face recognition system that can find people's faces in a photo and find resemblance to tag them with a name...

However, the general problem of recognising objects in an image, or a video clip, is still hard to solve and in general requires a human being to tell the computer what to look for and "how that looks like".

Now researchers at the BYU, Brigham Young University, have created a genetic algorithm that have the capability of discovering objects and classifying them with a high accuracy.

A "genetic algorithm", GA, is a search process ("search heuristics" for the cognoscenti) that  mimics the process of natural selection. It is used in Artificial Intelligence to create knowledge and understanding.

They basically submit large photos databases to the algorithm that, by seeing hundreds of thousands of pictures, starts to identify objects and develop an understanding about its abstract characteristics (the xxxshness).

An example is shown in the picture. The accuracy is pretty good and it gets better and better.

This capability can be applied in many areas, from manufacturing to entertainment, from health care (telling ho an elderly is doing in his home or detecting subtle symptoms during a teleconference with the doctor or a support center) to security control.

At the EIT ICT Labs we are interested in several of these applications, we are working on the Identity Management and that is in the neighbour of understanding an object characteristics (although we are shooting for 100% certainty, looking for a cat pretending to be a dog...), we work in cyber-physical systems where understanding of the operation ambient is crucial, we are working on IoT and Smart Spaces where again an understanding, through object recognition, is clearly important.