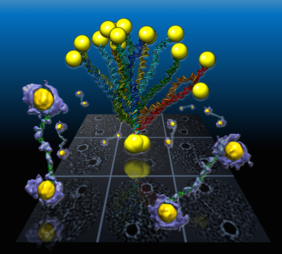 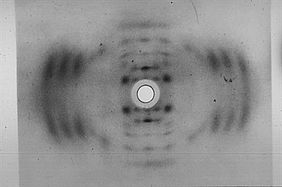 I remember seeing the first image of the diffraction pattern created by a DNA molecule that led to the discovery of the DNA structure and the hypotheses of the code of life (see black and white figure). I was amazed at how Crick, Watson,Wilkins -and lets not forget Rosalyn Franklin- managed to work out the DNA double helix structure from that first images.

Now I see that researchers at Berkeley Lab have managed to record for the first time the 3D structure of a DNA strand attached to ends to gold nanoparticles.

Take a look at the video clip. It shows how the researchers managed to create the 3D DNA rendering. They started by taking a series of "photos" and then using signal processing they pruned the images from the atoms that are not relevant to the DNA-gold nanoparticles structure and then recombined the images into a three dimensional continuum resulting in the visualisation of the DNA strand and of its fluctuations.

Of course we have had improvement from that 1950 first diffraction image in the capturing of the static photos of the DNA strand but most importantly we have had enormous progress in signal processing that, in turns, has been made possible by the increased processing capability we have today.

This is just another example of how the basic evolution in processing (and also in storage and communication) has fuelled evolution in many other (I would say "all") scientific domains.
And this is just the beginning. Although the Moore's law has reached its end of the line, its implications are far from over and we are likely to see even more progress in the application of processing power (as a recent and fashionable example the emergence of "deep learning") in many areas, big data analytics and big data rendering being just one of many.