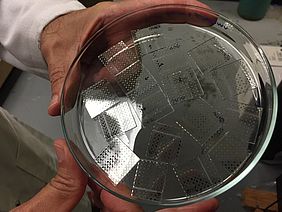 Our hunger for energy keeps growing and electricity is the form of energy that is easier to use but alas it is also very difficult to store. True, we have batteries and capacitors/super-capacitors but the formers have a good energy density (not as much as we would like, and not comparable to the energy density of oil) whilst the seconds have a good power density (you can rapidly retrieve the energy you need).

Now researchers at the Georgia Institute of Technology have created a sol-gel based material that can be used in capacitors as dielectric leading to a energy density that compares to the one of the best batteries. That would result in the best of both world: the possibility to store (relatively) large amount of energy and the possibility to use it as fast as needed.

The sol-gel (a silicon based material) forms a thin layer that is bounded to a layer of phosphonic acid, just one nanometer thick, serving as insulators. The resulting bi-layer structure has high insulating properties, required for separating the two electrodes of the capacitor, and can accomodate a high density of electrons, which is what you need to store energy at high density.

The bi-layer is deposited on a mylar sheet that is rolled up to form a capacitor with the desired capacity.

So far this bilayer component has been produced at laboratory level but if it will be possible to move to an industrial manufacturing than the use of capacitors can take a new spin.  Electric cars would be an obvious area of application.