Has your kid swallowed a battery? 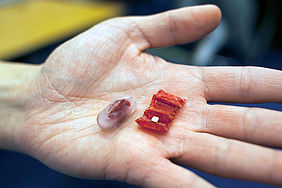 An “origami robot” unfolds itself from an ingestible capsule. It could be used by a physician to perform a remote-controlled operation. Credit: Melanie Gonick/MIT

In the US, apparently, 3,500 button size batteries are swallowed each year. I do not have any statistics for Italy but I imagine we swallow our share as well.

Swallowing a battery is not a good idea. Most of the time it keeps going through the GI and gets expelled. Sometimes, however, it sticks to the stomach or esophagus releasing an electrical current that produces hydroxide burning the tissues, and this is bad.  Hence you need to run to the hospital but the removal of a battery from the stomach of a small kid (that seems to be the ones that like to swallow batteries most) is a complex procedure.

At MIT researchers in cooperation with researchers at the University of York have invented an origami-like robot that can be swallowed (an easy task for a battery swallower...). It gets incapsulated in a ice pill and when the pill reaches the stomach the ice dissolves (look at the clip) and the robot comes to life.

The origami structure is such that the robot expands and start moving around capturing the battery with a magnet. At that point the doctor using a magnetic field guides the robot to discard the battery (and the magnet) in the GI for expulsion.

The robot can do more than help removing batteries. It can carry a drug and deliver it to the right spot, so even if batteries are not part of your diet you may end up appreciating the robot features.

The news is interesting because it shows yet another application of smart materials, in this case to create a mini robot.