Gut feeling: connecting the brain to the gut 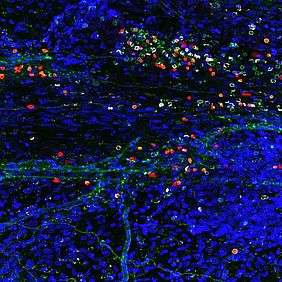 The English expression "Gut feeling" stands for getting a hunch without a rational reason, like the brain is not involved in the process but at the same time it gets the sensation from something inside "us". In Italian we have a similar saying, "di pancia".

Well, researchers at University of Virginia, School of Medicine, have found a physical connection between the brain and the gut, mediated by immune cells.

Type 2 Innate Lymphocytes, ILC2s, are immune cells present in the gut, lungs and skin and they act as barrier to viruses and bacteria. Now they have been discovered in the brain on the meninges.
Researchers are looking into their potential role and how to leverage them in the fight against Alzheimer, multiple scleroses, meningitis.

What researchers have discovered is a tight connection between the brain and the immune system through ILC2s. ILC2s are playing an important role in the gut regulating the microbiota (the ensemble of the bacterial flora present in our gut that is essential to our life).  Previously it was believed that the immune system and the brain did not communicate with one another. Not so. Based on the discovery just made ILC2s are an integral part of our brain "working".
The more we learn bout our brain (and brains in general) the more we find a growing complexity. Just 50 years ago the understanding was that te brain "working" was about neurones firing up. Then we discovered chemical communications and then that there is more to the brain than neurones, with astrocytes playing an important role. We also discovered that the term neurone is too broad. There are many types of neurones, over 500 different types just in the cortex and overall the list show several thousands (10,000 according to CCSI).

Notice that the brain is not just complicated, it is complex, which means that you cannot simplify it without "missing the point".

We can expect many more discoveries and quite a bit of fall out implications from the main initiatives like The Human Brain (in Europe) and The Human Connectome (in the US).

At IEEE we are also pulling together experts from many technological areas to address the intrinsic complexity of the brain and foster the application of the growing set of knowledge with the FDC The Brain Initiative.