Good news: our brain is still much better than any computer 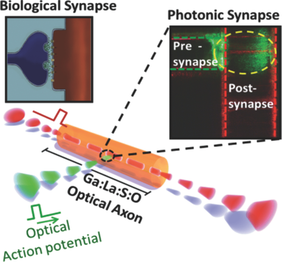 I stumbled, in my search for advances in .. advanced materials on an article discussing amorphous metal sulphide microfibres but don't worry, I am not planning to bother you with a chemical treatise.

Rather, what impressed me was that this "strange" material has been used to create an optical neurone, that is a simulation of networks of neurones made through special optical fibres. And in explaining the background of the study the researchers pointed out that present processing structures (including Synapse, developed by IBM to mimic networks of neurones) are so much expensive in terms of power consumed. Our brain uses less than 50W of power. Simulating its processing would require a supercomputer (actually the best supercomputer today, the Thiane-2 would require 500 seconds to emulate 5 seconds of a brain activity - beware, this does not mean that Thiane-2 is 500 times slower than a brain....) and that would involve 1.4MW of power. Hence the researchers are stating that our brain is more efficient than a computer used to simulate it by a factor of 1 billion. The numbers actually don't add up, but still it is indisputable that in terms of efficiency our brain wins hands down.

And this is the good news.

The bad news, of course, is that the inefficiency is related to the way we can simulate a brain today, which does not mean that it is the only way it can be done, nor that one needs to simulate a brain to get the same behaviour of a brain out of a machine (this is something open to philosophical discussion though).

What the researchers are proposing is a new approach to simulate a network of neurones, no longer using electronic circuits but photonics networks. In terms of pure efficiency photons are much better than electrons (a fibre is a thousand fold better than a wire in terms of information transfer from the point of view of power consumption - it is also able to carry much more information, but this is not the point here, since in the brain we do not need broadband connections....).

What they have demonstrated is that by using a special material, the amorphous metal-sulphide microfibre, it is possibile to simulate the behaviour of a synapse, with its different levels of activation, memory and processing. All this at a fraction of the power required by an electronic analogue.

We are still far from having an optical processing machine with a complexity that could sustain even a partial simulation of a brain but it is interesting to notice the progresses being done by researchers when they stop to think on the way Nature has tackled aspects like processing. I have reported a few of these progresses here in these posts. We still have plenty to learn and be inspired just by looking around and understanding more what we see!