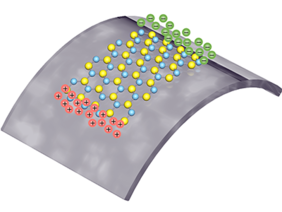 Positive and negative polarized charges are squeezed from a single layer of molybdenum disulfide atoms as it is being stretched. Credit: Lei Wang/Columbia Engineering

I have already posted several news on molybdenum disulphide (MoS2), a material that can be produced in layers one atom thick, like graphene, and that may be contender to graphene in several applications in the next decades.

Researchers at the Columbia University have developed what is the smallest-thinnest electricity generator using a layer of MoS2. They have shown that it can have piezoelectric properties: by bending it one can generate a current, in other words the MoS2 can transform mechanical energy into electrical energy. Interestingly this capability was predicted some time ago at a theoretical level and now it has been demonstrated in practice.

Piezoelectricity is a well know property of several materials but so far it was only found in the change of "volume" whilst here we are seeing this in the deformation of a surface (a layer one atom thick). Also peculiar is the fact that MoS2 as a material is not showing piezoelectric characteristics, they appear only when you have a layer of it.

The interest derives from the potential applications: having a layer of MoS2 with these characteristics means having a completely transparent surface that can potentially be overlaid on any other surface, including wearable "stuff" and can be used to measure deformation by measuring the current generated. Researchers are going as far as seeing layers of MoS2 weaved in cloths to provide electricity to wearable devices as we move around! They are also foreseeing layers of MoS2 used as power generators for nano devices, in particular nano sensors.

Generating a current, however, is not that simple. You need to have an odd number of M0S2 and the crystals need to be orientated in specific directions (this also explains why MoS2 does not have piezoelectric characteristics as a solid).

In order to obtain the appropriate orientation of crystals researchers layered MoS2 flakes on a flexible plastic substrate and used optical techniques to determine the crystals orientation.