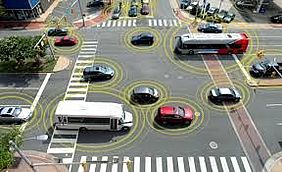 Vehicle to vehicle communications is a growing area of study and several trials are undergoing. Credit: Arstechnica

Clearly, creating a local network made up of (smart) phones is not a big deal. Military networks in the field are based on this principle, let the devices used to communicate be the same ones used to create the network. There is a bit of software to throw in and a bit of protocols to re-think. The software (in perspective) should be part of the device OS, it should not run as an application on top of it. It needs to provide protection to external attempt to tamper with the communication, something that is even more important as the device plays the role of a network node. The software should also create a map of nearby nodes to implement routing strategies. Each device should act as an autonomous system that dynamically adapt to the environment and at the same time condition the environment to play the game taking into account its existence.

All of this is feasible, although there is quite a bit to do in terms of standardization and balance between being a device owned by somebody and a network node sharing the burden of third parties communications. But there is nothing against scientific principles so for the sake of our gedankenexperiment it is ok.

Smart phones are already used for tethering, creating a communications area that can be used by other devices, media centers are WiFi connected with other devices within a home.

Nevertheless a stumbling block remains the power consumption for both transmission and processing.  Although processing requires less power than transmission one has to strike a balance between how much processing one should do to save on transmission power. This is another area for research in mesh network. Some interesting ideas are surfacing on the possibility of using background energy to power communications and even the bearer frequency (like a WiFi 1.2 GHz) to create disturbances that can be decoded into a signal by the receiving party and used by the sending party to power up its battery. This approach can work for sensors to send data to a smart phone or by a smart phone in presence of a beacon (as I will discuss later).

Technology is progressing rapidly and since we are in a gedankenexperiment we can pretend that these “power” issues will be solved since they are not violating any scientific principle.

Besides, if energy usage is an issue for smart phones it is not a major concern for vehicles that can also be used as network nodes. In a city we have thousands of cars, the bigger the city the more cars driving around and parked. Surely we have several cars within a 50m radius and they can be used as a network. There are many studies, and trials, on vehicle to vehicle communications, some looking at safety aspects, other at using cars as sensors, other as enablers for self-driving cars.