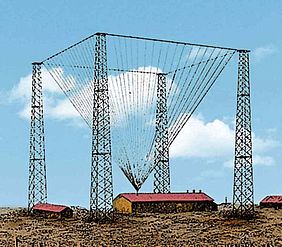 A sketch of the Guglielmo Marconi antenna set up at Poldhu in Cornwell and Cape Cod in Massachusetts for the first radio communications across the Atlantic. The transmission used long waves and required a gigantic antenna. Credit: SimplyKnowledge

A few more comments on technology evolution are needed in the wireless space. The electromagnetic field in a cable, in an optical fibre and in a radio transmission is all the same, but the propagation characteristics are different and this is tied not to the medium but to the frequency.

In turns the frequency poses different requirements on the generation and on the capture of the signal.

Technology limitation is the reason why the first radio transmissions were based on long waves (low frequencies). The electronic tube amplifiers used could only switch at a rate that supported generation (and decoding) of low frequencies. As technology progressed engineers have been able to use shorter and shorter wavelengths. The longer the wavelength the longer the antenna needed to capture it, the first radio transmissions required antennas that were tens of meters long. Clearly not practical to carry around.

As electronics got better we could start to process higher frequencies (hence we could use shorter antennas). That made handheld radio communications possible. Say welcome to cell phones. The signals get coded on a given range of frequencies and the wider the range of frequencies the more signals you can transport in a given time (it is actually quite a bit more complicated than this but for the purpose of our discussion it is fair enough). The electronics need to process that range of frequencies to isolate the signal. This requires a lot of processing capability. The more frequencies you want to inspect at the same time the more processing is required. This is why the first cell phones could only work a single "band", say 900MHz (GSM). Then as processing capability improved they started to process two bands, 900MHz and 1800MHz. Now we can use our cell phones in may parts of the world with the electronics able to process several bands at the same time, including the WiFi band.

Yet, the network architecture did not change to accommodate the transport of information in a single communication session over several frequencies, like some parts on a cell phone radio band and other parts on a WiFi band. This is something for the 5G.

On the other hand, our devices, like smart phones and tablets have grown to manage multiple bands within a communications session. Think about the possibility to set up a three party conference call from your iPhone. This is something that was only possible through some centralized network resource, being the network "smart" and the terminals "dumb". Well, it is no longer like that.

Our terminals have the processing power of a supercomputers (one produced at the beginning of this century).

Operators disregarded the growing processing and storage capacity of terminals, but the Over The Top leveraged on those, and it was them, the OTT, that initiated a revolution in the market, de facto starting the creation of a new (virtual) network architecture at the service layer.

Actually, Telecom Operators started to lose control of the market place some 25 years ago, although at that time only a few realized what was starting to happen. It all started with the answering machine and the fax.