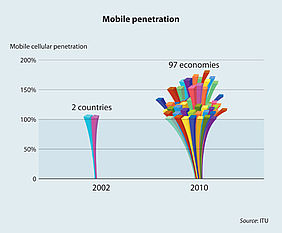 The explosion of mobile in the first decade of this century has been amazing. In this figure only 2 Countries had 100% penetration in 2002 of mobile phones. By 2010 there were 97 "economic areas" with a penetration over 100%. This amazing explosion did not change the basic telecommunications architecture at all. Credit: ITU StatShot

Let’s consider the current scenario from a market/usage perspective.

From a market point of view we have basically 7 billions humans users and many more devices. Humans have got used (or are rapidly getting used) to be always on, their use of telecommunications is still marginal in terms of voice, around 15’ a day on average (the length of a single call went down from the mythical 3 minutes to 1’40”, the number of calls increased from 5 to 7) but the number of transactions we make to access data has increased from 5 (the average number of calls) to several hundreds. This trend is going to continue: according to a recent report by Deloitte  26% of smartphone owners have not made any classic voice call in the last week. Devices (IoT) can interact anywhere from once in a while to thousands of times per day.

We are now using bits to communicate, be it for voice communications, sounds, video, information.
When we first digitalized voice we used some 480,000 byte per minute to “carry” a single voice conversation (times two, you talk, she talks…). Novel technologies decrease this  “need” to less than 40,000 bytes per minute (Kakao: 39,750 bytes per minute). Hence, the voice “burden” on the network has actually decreased by ten fold.  If you look then at the distribution of network usage per transaction you have that voice used to take on average 1.5Mbytes per transaction (480kB times 3 minute) whilst now it is taking 150Kbytes (75kB – taking Viber as reference, more with Skype less with Kakao- times 2 minutes).
At the same time the usage of networks for other types of communications has increased, and in two different ways.

-       IoT and request for information are both growing rapidly generating a number of transactions that far exceed both voice and video communications. These transactions involve a very low –on average- byte traffic.

The result of this market demand is that the original traffic distribution, that was based on voice, is now completely reversed: we no longer have a transaction peak around 1.5Mbyte per transaction but two peaks, one due to IoT and info request around a few hundred bytes (1,000 times less) and the other in the range of tens/hundreds of Mbytes (100 times more).

Could a network architecture designed to support an average around 1.5 Mbytes be the ideal one to support a market that has totally different demand?