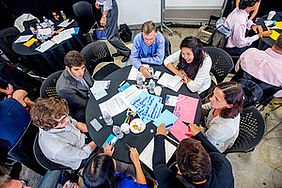 EIT Digital is active in its San Francisco Hub on fostering an SDN Federated Test Bed that would enables the trial of new solutions and new services and network architectures paving the way to 5G and supporting faster innovation in the connectivity space. Credit: EIT Digital

There are entrenched players and a lot of CAPEX in existing infrastructures. The strong attitude that has kept the telecom infrastructure architecture basically stable over the last 140 years is still prevalent among the Telecom Operators culture: make the best of a world that is capital intensive where good engineering means exploit the scarce resources.

Never mind that this world is no longer there. The culture persists.

So the question is: will we ever move to the kind of disruptive architecture I have outlined and if so what could be the intermediate steps?

What we are seeing is a growing interest by Telecom Operators to increase the flexibility of their network to avoid investing new CAPEX and to decrease the OPEX. This is not new, of course, what is new is the commoditization of network equipment and its “softwarization” making it more easily reconfigurable. Words like NFV (Network Function Virtualization) and SDN (Software Defined Network) are the talk of the town in the Operators and telco Manufacturers world. This does not mean that Operators are enthusiastically embracing SDN/NFV nor that Manufacturers are eager to move that way. However, economics sense is pushing in that direction even though both Operators and Manufacturers don’t like it. Operators fear an even more rapid commoditization of their networks, Manufacturers fear a further decrease in network equipment by Operators, thus further decreasing their sales.

At the same time the enormous processing capacity now available in the users terminals and the shifted balance of evolution from the network to the edges (and from Network Operators to terminal manufacturers) has tipped the balance towards the edges. This has started to force a service architecture decoupled from the network and that has resulted in the networking management from the edges (e.g. by autonomously choosing the access gateway: cell network or WiFI). Wait a few more years and the selection of network access (and networking) by the terminals will increase significantly: welcome to 5G.

In this sense, SDN (with the N representing “Networking” not “Network) is a first step in this direction. In a way we will see the services steering the network architectures, whilst so far the network steered the service architecture.

This is a revolution, with an impact on the economics (and players),  that will accelerate the disruption in the telecommunications sector. Expect to see dramatic changes by the end of this decade, with a strong consolidation process occurring in the coming 3 years in Europe.