From WiFi to LiFi 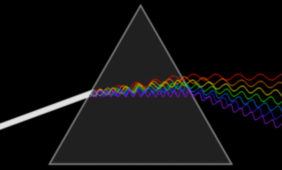 Light has a much higher frequency than radio and as such it can carry much more information. In the figure a prism splits the white light into its various wavelengths (colours...).

Coding information on a light beam is conceptually the same as coding it on a radio beam. Both are electromagnetic waves the difference being in their frequency, much higher in the case of light (light used to be "seen" as a different branch of physics and those studying it got used to talk in terms of wavelengths rather than frequencies. However the two are two faces of the same coin, bound by the speed of light: λ=c/f).

Having a much higher frequency (at least 3 orders of magnitude higher) we can encode much more information on a beam of light. On the other hand a wall, or a tree, will stop the light beam and so propagation of the signal is much more complicated.

It is now at least fifteen years that researchers have been working on using light as an alternative to WiFi (the term LiFi, Light Fidelity, was coined in 2011 in a Ted Talk by Harald Haas) and there are now a number of products with a market that is expected to grow to reach 6 B$ in 2018.  Some cities are considering using street illumination to bath streets with LiFi providing up to 1Gbps connectivity.  Of course in LiFi the communication is basically unidirectional (downlink) and one should use a different technology for the uplink. Notice that 5G may come handy in this respect being able to aggregate different gateways/technologies within a single session.

Now a team of researchers at the University of Eindhoven, one of our EIT Digital partner, is proposing to use infrared light as a WiFi conduit. This would allow speeds 100 times faster than the one delivered today by WiFi.

The system works with several beaming stations on the ceiling. Each station has an optical fibre as a feeder and beams different infrared wavelengths in the room. As a device move in the room it connects to the closest station and the system automatically reroute the information stream to the wavelength assigned to that device. Hence there is no bandwidth competition among the devices and each can get a stream exceeding (in the experiment) 40Gbps. The upstream link can be managed through a normal WiFi gateway.