From "Using" to "Not Using" 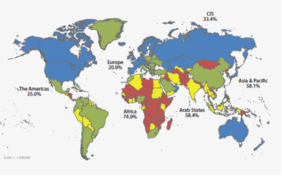 The International Telecommunication Union has published the ICT Facts and Figures 2016, an interesting snapshot on where we stand, as a World, in relation to telecommunications infrastructures and use.

As you can expect we have moved forward toward more penetration of mobile, better access to internet and so on.

What surprised me was a map of the world showing where people are NOT using internet. Till last year the map presented the number of people USING internet, this year the point of view is the reverse. It is not a little "conceptual" step.
It means that we are now taking for granted that internet has to be a sort of Universal Service hence we should look at who is not able to access it.

This represent a cultural change, I would say. Something we might use in the future as the tipping point.

I also found interesting to see that the gender gap (number of males using the Internet vs number of females) has grown 1 percentage point, from 11 to 12%. This is the consequence of a growing gender gap in many areas of the world. Only in the developed world (Western Countries, Japan and South Korea) the gender gap is sharply decreasing (from 5.8 in 2013 down to 2.8 in 2016), in all other areas it is increasing, probably as result of the growing usage of internet in those areas that sees men as earlier adopters.