From 2D to 1D transistors 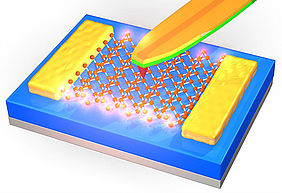 Peering into an atomically thin semiconductor device with a “microwave microscope” via an AFM tip. Credit: University of Texas at Austin

In the last sixty years transistors have kept "growing" smaller and smaller. From the first transistor (back in 1947) that measured some 10 cm to today's transistors that are measured in nanometers.

Usually we measure transistor in one dimension, however the untold implication is that we are basically measuring an edge of a cube, so a 20nm transistor is in effect a cube having 20nm edge.

More recently scientists have explored the possibility of creating transistors on 2D structures, materials that are just one atom thick (that is 1 to 5 angstrom thick, 0.1-0.5nm). Graphene and molybdenum disulfide are the most used 2D structures so far.

Transistors made on a 2D structures can in principle be packaged into a very dense structure, just by creating more layers of them (with some proper insulation and connectivity infrastructure). So far it is more speculative work, with some laboratory demonstrations that remains far away from an industrial manufacturing process.

Advances so radical require a much better understanding of what is going on at atomic level and tools to look at this scale are getting better and better.

At the University of Texas, Austin, a team of researchers have created a special microscope that can peer into a 2D layer of molybdenum disulfide to look at the properties of currents when a transistor is created on this 2D surface.

Interestingly, when observing the currents involved they discovered that it is possible to create transistors that make use of currents flowing just at the edge of the material. In practice, by creating a 2D transistor one can also create a 1D transistor that is existing in a line with no width and no thickness (that is one atom wide and one atom thick).

The possibility to create and work with 1D transistors would have significant implication on the power consumption since these currents flowing at the edge of the material (like plasmons floating on a surface) are subject to minimal resistance and hence minimal dissipation.

We are really at the edge of physics, quite far from practical applications. However, that was the case, back in 1947, with the first transistor, a blob of germanium with no industrial manufacturing process and no application whatsoever.