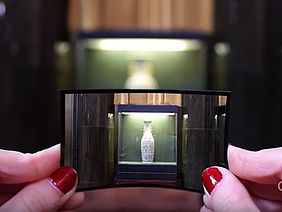 By bending the flexible sheet camera one can effectively change its focal length. Credit: Columbia University

Researchers at the Columbia University have created a flexible lens that can be used to create a flexible camera.
Flexible electronics is already a reality with several sensors already in production. Photosensors like the one used in digital cameras can also be made on a flexible substrata. The problem is that as they are bended the light rays are no longer focussed on the photosensors in a smooth way and the greater the bending the more "gaps" appear in the image.

At Columbia researchers have found a way to create a lens that bends in synch with the photosensors changing its focal length. The result is that light beams keep reaching the photosensors. To understand the effect take a look at the video clip.

What is fascinating is the kind of applications that would be enabled by a flexible sheet camera.

One could wrap the camera around a light pole in a city and get a 360° view. Or the flexible sheet can be used as a band around a car thus providing perfect visibility around the car.

According to the researchers the cost of the lens, and of the photosensors, will be very low, hence enabling a variety of applications.  The resolution may be way lower than the one we've got used with glass lenses and digital cameras but the software processing of the data harvested by the sensors can make up for that delivering perfect images.