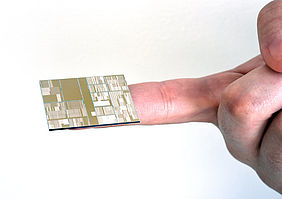 The 7nm chip shown by IBM as result of their 3B$ chip grand challenge initiative. Credit: IBM

On July 9th IBM has announced the production of the first 7nm chip. This is the result of a 3B$ initiative, the Chip Grand Challenge, launched last year. There have been plenty of "news" over the web outlining and commenting this result but the one I liked most was on ExtremeTech.

7 nm is an amazingly small length: about 3 times as big as a strand of DNA, the space it takes to place 70 atoms in a line. The most advanced industrial production in 2015 is on the 14nm (by Intel).

What piqued my interest in the news presented by ExtremeTech is that we have reached a point where the etching length is becoming a relative concept.

Only in the last decade if you said that a chip was manufactured at 65nm and another at 45nm it was a no brainer to say that the 45nm one was better (in speed, density, power consumption) than the 65nm. Now we have reached a point that when you say: "we have a new generation at 7nm, down from the 14 nm", you need to qualify it with a "but...".

Indeed, we usually measure (or talk about) the progress in chip evolution by using as gauge the etching size, but there are other important measures like the fin pitch, gate pitch and interconnect pitch. It used to be that the smaller the etching the smaller all the other parameters would become (in almost the same percentage). No longer so as you go below the 10nm etching. And it is not clear if the whole transistor based on a 7nm etching will be really smaller than the Intel one based on the 14nm etching.

Still, having succeeded in creating a chip with 7nm etching would have been considered impossible at the end of the last century. Anyhow this is a research result. We can expect industrial manufacturing, hence availability in our hands by 2018/2019.