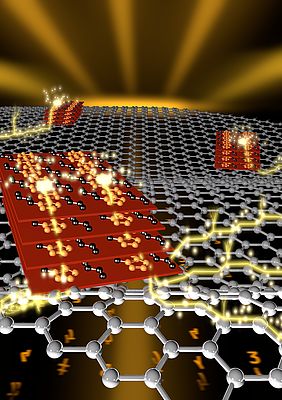 A material made of semiconducting polymer placed on top of graphene conducts electric charge extremely well and may enable new electronic devices. This work was featured on the cover of the journal Advanced Functional Materials. Credit: David Barbero

Graphene has amazing properties stemming from its atomic structure and from being a single atom layer surface.  However, you cannot have, and use, a single atom layer surface. Such a surface will have to be "layered" onto similar layers or, more likely, onto other materials providing "depth". The point is that electronic properties of graphene get affected by the surface of the material you are layering graphene on.

That's why researchers around the world are experimenting with various kind of substances to pair graphene with. It is actually more than that. The graphene characteristics can be decreased, or enhanced, by layering graphene onto specific surfaces. This is what experiments are showing. And this is what this news from SLAC (Stanford) National Accelerator Laboratory is all about.

Researchers have discovered that by layering a semiconducting polymer onto a layer of graphene you get better electrical properties than those occurring when the polymer is layered onto a silicon layer.

The different properties of silicon and graphene were expected. What was not expected was the increase in performance as the polymer layer grow to the size of 50nm (that is about 500 atoms thick). At this "thickness" you get a 50 fold increase in performance with respect to a polymer layer 5 times thinner (10nm). This was not what researchers expected since the usual understanding says that the thinner the semiconducting layer the better the flow of electrons. They are now trying to understand why it is so. A first hypotheses is that in a 10 nm polymer layer you get a structure with flat crystals where electrons have to find a way from one crystal to the next and their orientation being in a 2 dimensions sometimes creates "friction". On the other hand, when the polymer layer has greater thickness (50nm) the electrons can jump up and down, not just left and right (this is to give you an idea, a physicist would likely wish to kill me for talking of electrons jumping up/down, left/right).

This behaviour, that is fully experimentally demonstrated even though a strong scientific underpinning is yet to be agreed, would make this combination of graphene and semiconducting polymer particularly useful in applications like photovoltaic panels and diodes (diodes are everywhere .... in telecommunications to read what a fibre is carrying, in a DVD reader to convert the laser bouncing out from the disc into "electrical" bits, and in most electronic devices you can think of).

Another example of the way scientists work today at atomic level. Something that was unheard of in the last century (and that was just 15 years ago).