Ever wish you were a fly? 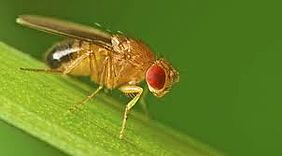 A drosophila, the kind of fly scientists have been working on to prolong its life span.

Sometimes I heard people saying (may be that goes for the Italian language only): "I wish I were a fly" meaning that you could fly undetected and see/hear ...whatever.

Now I drop onto a news that would bring another reason for wishing to be like a fly: the possibility of extending your life span by 50%! Considering an average life span of 80 years that would mean to push it up to 120 years! Wow!

The news comes from the University of Bern, Switzerland, where a team of researchers have discovered a gene, they named it ahuizotl after the name of an Atzetc god, that destroys damaged cells. The destroyed cell is soon replaced by a new -and good- cell thus avoiding the progressive degrade of functionality that we call "ageing".

They have tested their discovery on a fly, drosophila melanogaster, and indeed they have seen an increase in the insect life span between 40 and 60%.

Interestingly this gene is quite ubiquitous and yes, we human have got it. Clearly it was "invented" by Nature at a time when there was a common ancestor for both the fly and the humans, that is some 600 millions years ago.

Clearly you cannot expect this discovery to turn into a pill you can swallow tomorrow and increase your life span by 40 years. It will take a few more generations but it is amazing to think that humans are on the brink of extending their life by tweaking with the code of life. So far life has been extended through better food and pure water, and the extension in 200 years has been over 60%!