Etching transistors, one at a time 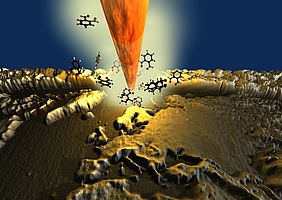 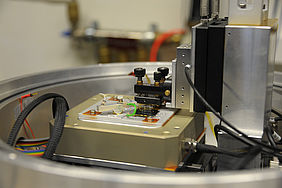 IBM scientists have invented a tiny “chisel” with a heatable silicon tip 100,000 times smaller than a sharpened pencil point. Using this nano-sized tip, which creates patterns and structures on a microscopic scale, scientists etched a magazine cover in less than two minutes onto a polymer. The resulting magazine cover is so small at 11 x 14 micrometers that 2,000 can fit on a grain of salt. Credit: IBM Research

When we look at a new product, be it a strawberry or the latest iPhone,  we seldom realise that such a product is just the tip of the iceberg, that most of our awe should not be placed on the product itself but on the "tools" that have made such a product possibile and within our reach (did you ever stop to think how that nice looking strawberry ended up on that shelf in front of you in spite of being winter time...?).

Actually, when palaeontologists try to assess the level of evolution reached by our ancestors, the Cro-Magnon, with respect to our cousins, the Neandertals they don't look at the artefacts found but at the tools they were using to produce those artefacts, the chisels and so on.

I just finished reading a book on our ancestors and probably that has stimulating my interests in a news from IBM on the development of a chisel that can work on the nanometer scale.

The report is given in a paper on Advanced Materials. Although building pyramids can seem an amazing feat, moving a few atoms around in a precise way is much much more difficult, and this is what IBM has been working on for decades.

You might remember several years ago the photo of the name IBM written using single atoms moved by an electron force microscope.  The result was impressive but it had very little practical application.

Now IBM has managed to create a machine that can work at the nanoscale to create 3D structures. In the video clip you can learn how it works.

This level of "miniaturisation" is not new, the most advanced lithographic techniques have reached the 8 nm range but the approach is completely different. Current processes allow the manufacturing of millions, billions of transistor on a wafer surface, here IBM is able to manufacture a single transistor using a few molecules (more like a 3D printer approach although here the transistor is made by etching not by aggregation as a 3D printer would do).

Such a transistor is basically useless if you are looking at it in terms of a component for your next cell phone: you will need billions of them and it will take ages to manufacture them in this way.
However, having the possibility to create a single transistor at the nanoscale allows scientists and researchers to study physical properties that manifest themselves only at this scale. It is a sort of prototyping. Once they have tested what happens than they can decide what to do in the standard lithographic process.

This is becoming more and more important since the lithographic process has reached a thresholds where the behaviour of electrons gets influenced by quantum properties and testing the implication is required to move forward.

Yes, about 40,000 years have passed since the very nice, advanced, chisels of the Cro-Magnons. And here we are, talking again of another advances chisel!