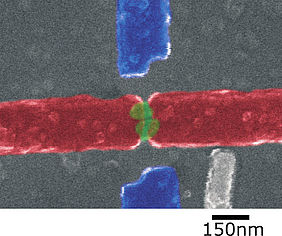 False color scanning electron microscope image of the device The two green spots are the quantum dots located in the gap between the two (red) electrodes. Credit: RIKEN

This phenomena was well described, at an hypothetical level, in a famous paper by Einstein, Podolsky and Rosen making the point that this phenomena was absurd and contradicted the theory of Relativity, hence it was impossible having Relativity been proven over and over in the physical world.  Unfortunately, also the quantum entanglement was proven to be true in the physical world. Quantum Theory and Relativity Theory are both good representations of reality although they don't fit with one another (however, it was subsequently proven that the entanglement does not violate the relativity principle forbidding instantaneous transmission of information, since there is no information transmission, for an easy to understand explanation look here).

The particle entanglement has been observed many times and actually it is being used to provide secure communications over optical fibre networks. It cannot stop eavesdropping but you know that somebody is tampering with the communications and therefore you can take countermeasure.

Early this year I reported the news that researchers have been able to create quantum entanglement of photons on a chip and later I reported that another research team has been able to entangle electrons.
Now I stumbled onto this news from RIKEN (Japan)  that researchers have been able to entangle electrons on a chip and use them for communications within the chip preserving the entanglement. In other words this means the possibility to transmit quantum bits something that is completely new.

Distributed quantum computation is not yet around the corner, we are still arguing about the implementation of a quantum computer today. Yet, interesting to see how science and research keep pushing the envelop.