Entangled particles remain intimately and instantaneously linked throughout their existence. This image, which first appeared on the cover of Nature in October 2006 (vol 2 no 10), is an artist's impression of how quantum teleportation of particles is achieved via the phenomenon of entanglement. Credit: Nature 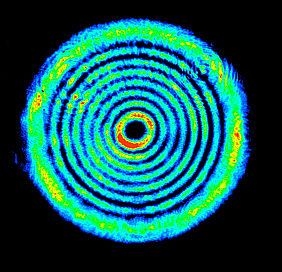 An example of intensity distributions belonging to different modes of photons. Each of these modes corresponds to one of the distinguishable states that were entangled in the experiment. Credits: Krenna et al. Institute of Quantum Optics at the Austria Academy of Science

As economy relies more and more on digital transactions their security becomes more and more important. PKC, Public Key Cryptography, is the leading technology for ensuring transaction security. It was invented in 1976 and it is based on the complexity of finding the factors in a very large number. Even the most powerful supercomputer would require thousands of years to factorise such large numbers. However, the advent of quantum computers may render PKC obsolete by provinding a way to factorise any number in a blink of an eye (it is not exactly clear when this will happen, nor if the D-Wave machine today can be considered a real quantum computer).

An alternative to ensure security in transaction is to leverage on a strange quantum property of photon's polarisation/spin, more specifically of entangled photons. These are couples of photons that are created (yes, they are created out of an interaction) in such a way to have opposite polarisation or opposite spin. The entanglement is the result of the fact that the measurement of the characteristics of a particle (a photon in this case) cannot be done without affecting instantaneously the property of the second particle (the measure is actually performed on the couple). If I try to read the spin of a photon the result is to change its spin and in turns this has the effect of changing, instantaneously, the spin of the other entangled photon. This "instantaneously" was used by Einstein to declare that quantum mechanics is wrong since the characteristics of the space time continuum of our universe, described in the theory of relativity, simply does not allow that. And yet this is not so. Quantum mechanics does not know the theory of relativity!

Other researchers, this time in Austria, have shown the possibility to create a quantum entanglement in 103 dimensions, up from the previous 11 dimensions entanglement.

The different dimensions are the result of state superposition of different states, like phase, angular momentum, spin, intensity,...

The possibility of achieving such a wide range of dimensions with just two entangled photons dramatically simplifies the application of entanglement to achieve secure transmission in complex networks, thus cutting on cost, the crucial parameters to look at when we try to understand the potential success of a technology.

And this brings me to the last news about the discovery by a team of researchers at the University of Toronto, of an effective way to generate entangled photons.

They have been able to do that using a normal LED source coupled with a superconductor. In the words of Hayat, one of the researcher who is also a Global Scholar at the Canadian Institute for Advanced Research:

“A usual light source such as an LED emits photons randomly without any correlations. We’ve proved that generating entanglement between photons emitted from an LED can be achieved by adding another peculiar physical effect of superconductivity — a resistance-free electrical current in certain materials at low temperatures.”

All these advances in application of quantum physics open up new, unchartered paths. Here I mentioned the application in the security area, but there are many more, from advancing the efficiency in energy transformation to even more interesting application to analyse Big Data sets.