Natural energy sources are unevenly distributed on the Planet and they are depleted at different rates. Notice the Japan does not show on the map and the reason is that energy sources in Japan are very scarce. 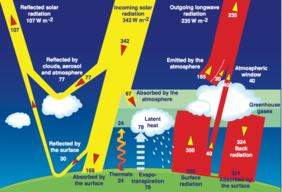 The Planet is in a thermal equilibrium achieved through a balance of various factors. The Planet will remain in equilibrium, no matter what, but the change of factors disrupts the living ecosystem and can be disastrous to many species.

Of course if we were to have abundant energy, increasing power consumption should not be an issue, shouldn’t it?

In this map we can take a look at where we stand in terms of using energy sources that are today exploitable at an affordable cost. Notice that as we change our definition of affordable more or less energy sources become available. The map is based on the energy sources that today are considered affordable in the sense that are those we are using today. If a Country has a map that is bigger than its actual geographical area it means that it is using more power than what it is available hence it is depleting the overall resources. Again, one should place a term of reference in this depletion: if you are using wind as energy source you never deplete it, since for the foreseeable future there will be wind (somewhere), whilst if you are using coal you will have to wait a few million years to renew coal sources.

Several Countries look bloated, it means they are chewing more on our energy reservoir than what is actually available and they are doing that by borrowing from other Countries (look at Africa) and from future generations.

Technology evolution can change the landscape of affordable energy sources.  The map shows the explosion in gas availability in the US as result of the new fracking technology that made available at affordable cost a huge, and just a few years ago unexpected, source of energy to the point of changing geo-political relations (having cut US dependency on Middle East oil and the need to agree on oil price to safeguard domestic oil extraction market the US have changed their policy towards Iran, as an example…).

Hence this map showing the ecological footprint of energy usage, once the population size, and hence the total power consumption, is taken into account. Arabia is no longer bloated even though its citizens on the average has a level of power consumption that would require 6 Earth Planets to sustain it globally (and we only got one). US on average would require 4.5 Planets and there are 300 million people there, hence the real impact is big, and the same goes for Europe although on a smaller scale (2.5 to 3 Planets please…). India is basically au pair although this is the result of a huge part of its population that does not use any energy or very little, China is slightly bloated but that is more the result of using power to produce goods for the Western world than a real internal use (and of course it has the largest headcount).

So we are looking at an ecological footprint, that similarly to the depletion of energy sources is not sustainable for long (although estimates differ in defining the “how long” and keep shifting because of advances in technology that change the lay of the land).

Often we hear voices saying that it is a “non issue”, that we have got so much Sun energy being poured on the Earth that it is just a matter of becoming smarter in capturing it and the issue of energy sourcing will go away. How many times we have heard that Sun illumination of the Sahara can easily power for free all Europe needs?

Letting aside the practical hurdles in covering the Sahara with photovoltaic glasses and the technical difficulties in transporting the energy from Sahara to Europe without dissipating it on the way it remains the fact that we will be using a gigantic amount of energy that today is being re-irradiated in the vacuum of the space through a number of processes that maintain the Earth in equilibrium. The Earth doesn’t get colder, nor warmer (it does but within very small fluctuations and over long periods of time).

This balance is crucial to the survival of the Earth ecosystem. Increasing carbon dioxide in the atmosphere changes the factors and may lead (is leading) to disruptive consequences for several species, ours included.

The fact is that the second law of thermodynamics is quite clear about what happens when you transform one form of energy into another: you get heat along the way! And therefore the more energy we use the more heat we produce and this will keep warming the Planet. Not a good idea.

Therefore even if we were able to access unlimited energy sources there would still be a very strong motivation to keep their use to a minimum. In perspective it is much more important to cut on consumption than to increase energy resources availability!