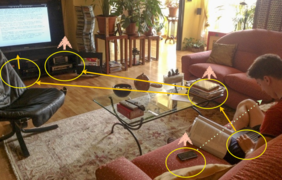 My living room is teeming with networks, courtesy of my son.

So, if we are looking back at the power budget for telecommunications since the shift from electromechanical switches to electronics switches we can see a constant increase in power consumption, that has been driven in the wireline area by the increased penetration of electronics and the related need for air-conditioning plants, whilst in the wireless area by the increased density of traffic (after the first phase of coverage).

The figure refers to power consumption in the Telecom Italia network but it is a fair representation of power budget growth in all Wester Countries wireline infrastructure.

The savings shown at the turn of the century have been mostly the consequence of smarter air conditioning strategy and the management of the increasing traffic with basically no impact on the power budget in the last decade and in this one can be attributed to the better electronics and to the pressure put on manufacturers to decrease power consumption. This, for a network like Telecom Italia, means 2TWH a year.

As Telecom Operators and Telecom Manufacturers were busy in decreasing the power budget a subtle but overwhelming power consumption increase took place at the edges, and there are no signs of a levelling out, nor to mention a decrease.

In this annotated photo taken in my living room, an invisible mesh of communications infrastructures permeate the ambient, generating a power consumption that exceeds the one of the last mile from the switch and the fraction of the core network that can be statistically charged to my line.

And this is just about the meshed networks. To get the total power budget you should factor in the iPhone, keyboard and iPad batteries, plus the Apple TV, television, Time Capsule mains.

What this means is that in the last ten years we have seen first the appearance and then the tremendous growth of power consumption at the edges that today can be estimated around twice the Telecom Operators power budget and might triple it by 2016 according to estimate from the European Commission.

If we are serious about energy issues in telecommunications (but this applies to all sectors when looking at them from an energy perspective) we should take the broader view. Looking at the network is not enough. Worse, by focussing at the network we may come up with solutions that worsen the overall picture. Telecom Operators in these last 15 years have managed to decrease (not increase) their power budget but have shifted at the same time power consumption at the edges with the end result of a global increase in power consumption.