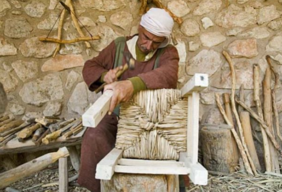 A carpenter finishing a chair. The power consumption might be in the order of 1KWh, significantly less than the one needed for manufacturing the chair by machines. Of course these are much faster!

Since the Industrial revolution the focus has been on productivity, not on Energy. Energy enters into the equation only when we are looking at cost. If the cost of energy is low, no problem.

However, if we look at energy efficiency we discover that Nature is more efficient than the homo habilis and the reason is clear: for Nature Energy matters and for over 3.4 billion years of evolution the guiding principle has been energy efficiency.

All fundamental activities taking place within the cell(s) of living beings are constrained by the second law of thermodynamics and evolution has been a fight to get around it by using external energy and doing that in the most efficient way, be it a bacteria, a cactus, a fly or ourselves.

With Internet, actually, with the Web, we have discovered a most effective way to decrease, and in several case almost zero, transaction cost. These are the ones involved in the thrift of our Society, a sort of second law of thermodynamics in economy (sometimes called: there is no free lunch). Today we can use facilities at marginal cost (like processing and storage in the Cloud), we can use complex processes at marginal cost, like advertisement via YouTube, selling via eBay, …

We can also reach quasi zero transaction cost if we deal in bits, rather than atoms. Sending bits is basically for free. Hence, the amazing development of OTT, of ecosystems where the cost of being a player is so low that anyone can be there, it is actually so low that the dinosaurs that need a lot of energy to survive are on the brink of extinction.

The trend is clear. We will be seeing, thanks to technology and economic drive, a progressive transformation of atoms into bits and most of the intelligence, information transformation, will take place at the bit level. Google Glass are opening up a new possibility to operate in the bits world by mashing them onto the real world.

Eventually we will have to turn bits into atoms again but at the very last moment, may be using a personal 3D printer. This will cut dramatically on the energy usage.

The interesting thing is that swarms of autonomous systems create their own environment and this environment, out of the many possible ones tend to be the one with the lowest energy level.

Take a Google car. It can find its way around, but thousands of autonomous cars can dynamically reshape a township topology deciding, autonomously, that one road now has become one way-street and half an hour later its direction can reverse, that a large avenue has 5 lanes in one direction and just one in the other at that particular time whilst 10 minutes later it might be 4 and 2 lanes. You get the gist.

Interestingly it was observed by Kleiber in the last century that as organisms gets bigger so their metabolism grow (and that is obvious) but the growth is not liner but follows an exponential curve with exponent 3/4.

That is strange because you may think that the metabolic rate has to be a balance between the amount of heat created and heat dispersed. Being the heath created a function of the volume it should grow at the cube whilst the dispersion being a function of the surface should increase at the square. Hence the metabolic rate is constrained by the dissipation of heat and should grow by a 2/3 exponent. Actually, data show that it grows with a 3/4 exponent. Why is it so?

The answer was discovered in the last part of the last century when it was observed that the heat dissipation is achieved through a fractal structure that indeed grows at a 3/4 exponent ratio.

It turns out that the fractal growth applies to other complex systems. Recently it was observed that the wealth produced by a city depends on the size of the city, the bigger it is the more wealth is produced and guess what: the ratio of wealth versus size also grows at the 3/4 exponent. Hence the challenge for Smart Cities planner is to find architectures that result in better ratio, and in particular in cities that can produce more wealth, without increasing their size too much.

This is a challenge we have in any complex system, and the energy aspect is a fundamental component that needs to be designed with the overall target result in mind.

To conclude energy is a crucial component in life and life, in a way, is all about energy, be it atoms or information. We have been abusing energy living for three hundred years under the impression that energy was there on demand. Nature has been much wiser, using as little as possible. It is time to step back and learn ourselves how to design our lives and habitats with as little energy usage as possibile. However, it is not just about technology. When we look at the way we use energy a significant portion of it is under our control, as individuals.

I remember when I was a kid we use to have light bulbs with 40W (some where even 25W) and if one was switched on the others were not. Now in my home I have halogen lights with 300W power and there are several of them that are on at the same time. My consumption, just for lighting up the home has increased 50 folds probably. Same goes when using a car instead of walking. Some times it would have been faster to walk than to drive, and yet, the car seemed a more convenient choice. And the energy bill goes up.

Culture play a significant role in our energy use.

Awareness will increase our capabilities to master energy use and preserve the world for future generations.